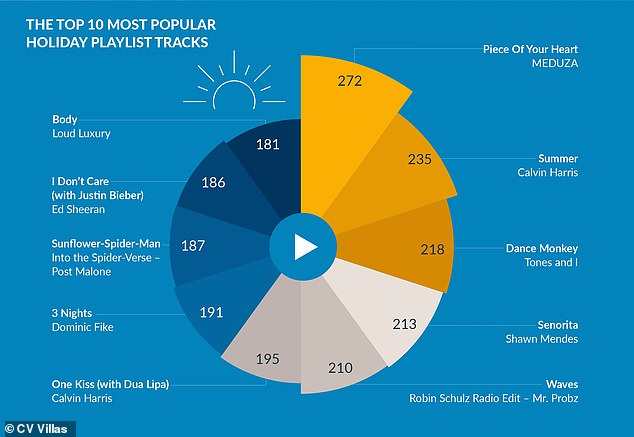 A chart showing the top 10 most popular holiday playlist tracks on Spotify. Researchers analysed 7,000 playlists on the music streaming service 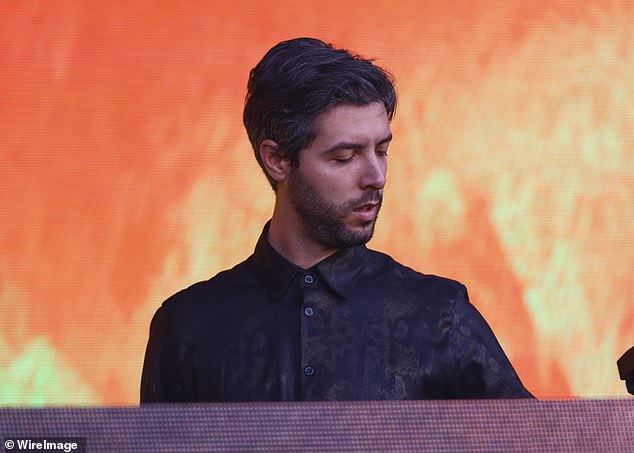 The dance track Piece of Your Heart by Meduza, pictured, is the most popular holiday song, featuring on 272 Spotify holiday playlists 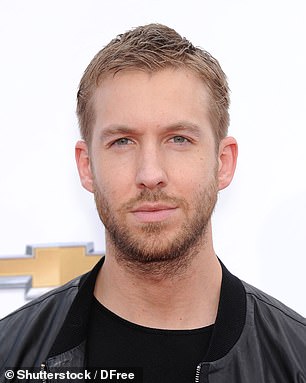 Calvin Harris, pictured, is the most popular artist on holiday playlists. His tracks appear 1,802 times 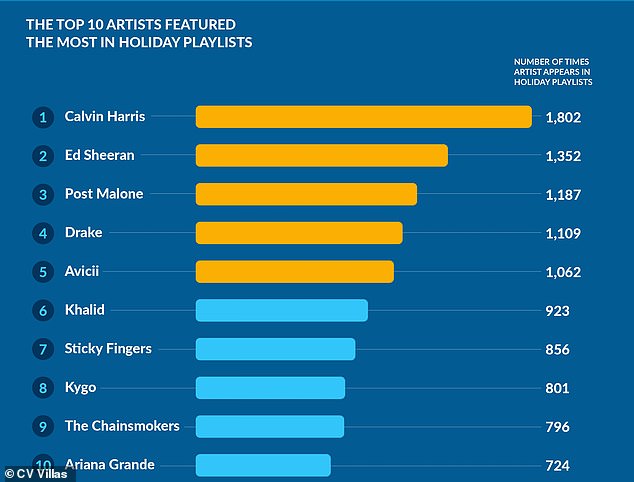 When it comes to the most popular artists on holiday playlists, Calvin Harris is top, followed by Ed Sheeran and Post Malone

The most popular holiday songs of all time have been revealed – and it’s 2019 dance track Piece of Your Heart by Meduza that is No1 overall, according to a new study.

In second place is Summer by Calvin Harris and in third place is Dance Monkey by Tones and I.

Calvin Harris moves up to the No1 slot in ‘the most popular holiday-song artist’ ranking, followed by Ed Sheeran.

The 10 most popular holiday songs of all time

1. Piece Of Your Heart – Meduza

Piece of Your Heart features on 272 out of the 7,000 playlists that researchers analysed, Summer is on 235 playlists and Dance Monkey features on 218 playlists.

The fourth-most popular song is Senorita by Shawn Mendes, which is on 213 playlists, followed by Waves by Mr Probz, which features on 210 playlists.

In sixth place is One Kiss by Calvin Harris and Dua Lipa, which is on 195 playlists, and in seventh place is Dominic Fike’s 3 Nights, which pops up on 191 playlists.

The third most popular artist is Post Malone, featuring 1,187 times, Drake is fourth, with his songs appearing on playlists 1,109 times, and fifth is Avicii, whose songs pop up 1,062 times.

Researchers also looked at the most popular retro songs appearing on holiday playlists on Spotify and compiled a list of the top 10 classics to make the top 100.

The highest-ranked song is Mr Brightside by The Killers, followed by Africa by Toto in second and Earth, Wind and Fire’s September in third.

Fourth is Electric Feel by MGMT, fifth is the Bryan Adam’s track Summer of ’69 and sixth is Brown Eyed Girl by Van Morrison.

Completing the top 10 is Sweet Home Alabama by Lynyrd Skynyrd (seventh), The Empire of the Sun track, Walking On A Dream (eighth), Island In The Sun by Weezer (ninth) and Three Little Birds by Bob Marley and the Wailers (10th).

8. Walking On A Dream – Empire of the Sun

The 10 most popular holiday artists

Meanwhile, researchers have predicted the top 10 most popular holiday songs for 2020 by analysing what features in holiday playlists created this year.

Topping the list is Dance Monkey by Tones and I and Senorita by Shawn Mendez, which both feature on 16 holiday playlists created so far this year.

Circles by Post Malone is on 13 playlists while Memories by Maroon 5 and Kygo’s Higher Love are both on 11.

Dua Lipa’s Don’t Start Now and Blinding Lights by The Weeknd are both on nine 2020 playlists.

Rounding off the top 10 is Cake By The Ocean by DNCE, as well as the Ed Sheeran tracks Beautiful People and I Don’t Care, which feature on eight playlists.

Pete Brudenell, head of marketing at CV Villas, said: ‘Music and travel go hand in hand and this research provides a great snapshot of the most popular songs that people choose to accompany their summer holidays.

‘Interestingly, it’s the tracks that have come out in recent years that featured most heavily in the top ten of all time, rather than older tunes or retro classics.

‘Whether you’re dancing around a pool with a group of friends, or having a romantic meal with your partner on the terrace, we hope the project sparks conversation and inspiration for your next trip.’

To see the full list of the most popular holiday playlist tracks and to view a Spotify playlist containing them, visit cvvillas.com/poolside-playlists.