The singer said her charity, the Clara Lionel Foundation, was ‘already figuring out’ how it can help the victims of the Category 5 storm 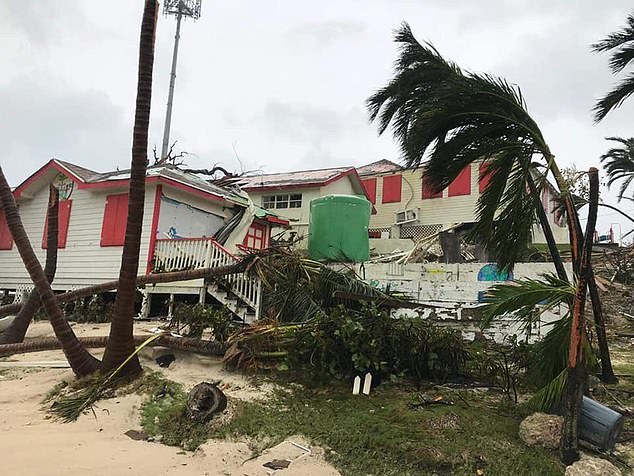 Initial estimates say that some 13,000 homes have been destroyed by Dorian, which hit the Bahamas on Sunday, with at least five people killed 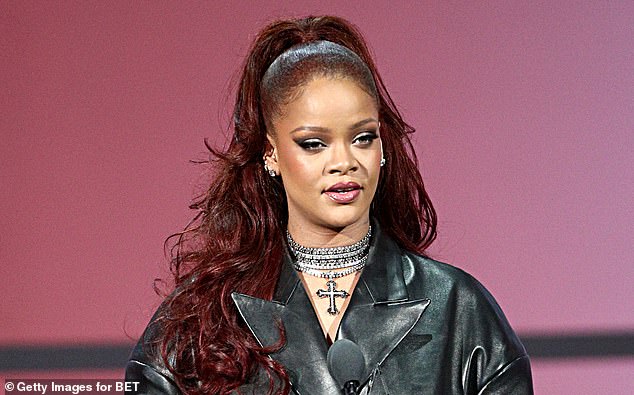 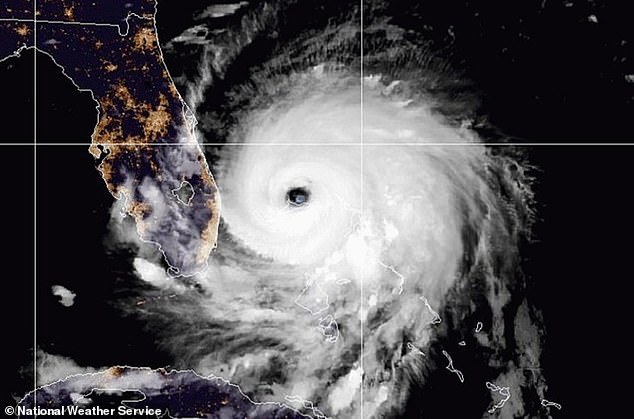 The hurricane is seen in a satellite image with the state of Florida marked. The storm has stalled over the Bahamas but is set to move towards the U.S. coast later today

A ‘heartbroken’ Rihanna has pledged to help the Bahamas after the country suffered ‘catastrophic damage’ from Hurricane Dorian.

The 31-year-old promised that the charity she founded in 2012 was ‘already figuring out how best we can help’ after the Category 5 storm battered the islands for more than 40 hours.

‘It truly breaks my heart to see the complete devastation that Hurricane Dorian is having on the Bahamas,’ she said.

‘You are in our prayers,’ she added.

Initial estimates say that some 13,000 homes have been destroyed by Dorian, which hit the Bahamas on Sunday, with at least five people killed.

Rihanna was one of several celebrities including Dan Rather and Reese Witherspoon to offer their condolences to the stricken Caribbean nation.

Witherspoon called the damage ‘beyond devastating’ and said she was ‘praying for my friends and families in Bahamas’.

Teenage climate activist Greta Thunberg also offered her sympathies, saying: ‘Today our thoughts are with the people in the Bahamas. Stay safe.’

Celebrity chef Jose Andres is already in the Bahamas to help provide food for people affected by the storm.

He has also promised to assist coastal dwellers in the U.S. if Dorian does major damage there.

Rihanna, who is originally from Barbados, founded her charity in 2012 and has raised millions for education and emergency relief at charity galas.

She previously donated to help the survivors of Typhoon Haiyan, a tropical cyclone which devastated the Philippines in November 2013.

Haiyan’s winds reached speeds of 195mph, even greater than Dorian’s, although Dorian was more powerful when it made landfall.

The foundation also helped the victims of Hurricane Maria, another Category 5 storm which ravaged Puerto Rico in 2017.

The charity’s name, the Clara Lionel Foundation, is a tribute to Rihanna’s grandparents Clara and Lionel Braithwaite.

It also has a scholarship fund as well as an oncology and nuclear medicine center in Barbados, where Rihanna was born and raised.

Crawling over the Bahamas for more than a day, Dorian unleashed torrential rain and wind gusts of up to 225mph on the Abaco Islands and the island of Grand Bahama.

The Red Cross said the storm had caused ‘catastrophic damage’ and said volunteers in the Bahamas were already supplying hygiene items and phone chargers.

Two of the designated storm shelters flooded and many residents were left to their own devices as police chief Samuel Butler admitted: ‘We simply cannot get to you’.

Bahamian officials said they received a ‘tremendous’ number of calls from people in flooded homes as wind and rain continued to pound the islands.

One radio station said it received more than 2,000 distress messages, including reports of a five-month-old baby stranded on a roof.

A message from Kendra Williams, who lives on Grand Bahama, said: ‘We are under water; we are up in the ceiling. Can someone please assist us or send some help. Please. Me and my six grandchildren and my son, we are in the ceiling.’

Some injured residents from a clinic on Great Abaco Island arrived in Nassau to receive medical treatment after being transported by a U.S. Coast Guard helicopter.

‘We are in the midst of a historic tragedy,’ Prime Minister Hubert Minnis said. ‘The devastation is unprecedented and extensive.’

Meanwhile evacuations are under way in Florida, Georgia and South Carolina where heavy rain and even possible tornadoes are predicted today.

The storm has weakened but is still a powerful Category 3 hurricane, and could cause highly dangerous storm surges on the U.S. coast even if it does not make landfall.

Disney World will close early today as Florida braces for impact amid fears that the storm could veer off course and hit the mainland.