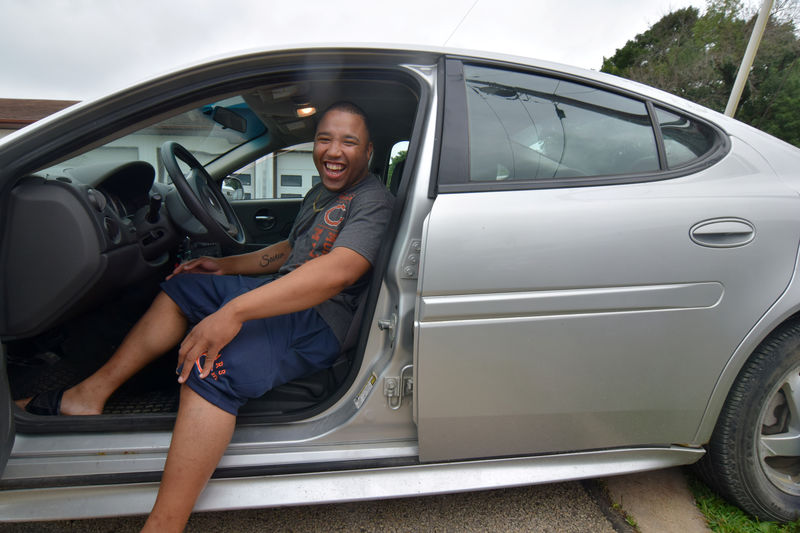 © Reuters. Hollis Heyward shows off the 2005 Pontiac Grand Prix that he bought for $1,300 cash in Freeport

FREEPORT, Ill. (Reuters) – For America’s working poor, an often essential ingredient for getting and keeping a job – having a car – has rarely been more costly, and millions of people are finding it impossible to keep up with payments despite prolonged economic growth and low unemployment.

More than 7 million Americans are already 90 or more days behind on their car loans, according to the New York Federal Reserve, and serious delinquency rates among borrowers with the lowest credit scores have by far seen the fastest acceleration.

The seeds of the problem are buried deep in the financial crisis, when in the midst of the worst economic downturn since the Great Depression, automakers slashed production. A decade later, that has made a relative rarity of used 10-year-old vehicles that are typically more affordable for low-wage earners.

According to data provided to Reuters by industry consultant and car shopping website Edmunds, the average price of that vintage of vehicle is $8,657, still nearly 75% higher than in 2010 despite some softening in prices over the last year. The average new car, in contrast, has seen a price rise of 25% in that same time period.

“This is pinching people at the worst point possible,” said Ivan Drury, Edmunds’ senior manager of industry analysis. “If you need basic A to B transportation, you have to get an older car that needs more repairs and has more wear-and-tear issues.”

Monthly auto payments for Americans making under $40,000 have remained flat since 2017, while those in higher wage brackets have seen their payments rise, according to a Cox Automotive Inc analysis for Reuters.

On the face of it, this might seem like good news. But to Cox chief economist Jonathan Smoke, it indicates poorer Americans are stretched so thin they cannot afford to pay more.

“They just don’t have any flexibility to increase their payment,” Smoke said.

Weak lending standards in recent years are partly to blame for the rising delinquency rates, which Warren Kornfeld, a senior vice president on Moody’s financial institutions team, said are approaching record highs despite a solid economy.

Auto lenders are belatedly tightening lending standards, but it may already be too late, he said.

Research from the New York Fed earlier this year showed that while delinquency rates among borrowers with high credit scores have remained steady and low, for subprime borrowers they have been rising, pushing up the overall delinquency rate. Around 8% of loans originated by lower-score buyers with a credit score below 620 were categorized as seriously late, “a development that is surprising during a strong economy and labor market,” Fed researchers wrote.

Heyward can only get to work by car.

Suddenly also stuck paying off the loan on his future ex-wife’s car, Heyward had to rework the loan with local used-car dealer Gordy Tormohlen of Good People Automotive. Under his “workout” deal, Heyward is paying the loan’s principal only and Tormohlen has waived the interest payments. Heyward’s monthly payment is now around $120 per month, down from around $350 before the workout.

“Right now, it’s hard to make ends meet,” said Heyward. “But I am not the kind of guy to walk away from my commitments.”

Tormohlen, 59, a second-generation dealer, said his business is up 10% this year as auto finance companies tighten lending standards. He said the market feels like it did before the financial crisis hit in 2008, when consumers were over-extended with debt.

“Americans have grown too comfortable with debt and the time has come to pay the piper,” he said.

Tormohlen is a “Buy Here, Pay Here” dealer, offering subprime loans that he finances himself at 19%, which is higher than a bank but lower than many finance companies.

He said he can work directly with struggling customers like Heyward, whom he has known for a decade, but worries that large finance companies with tens or hundreds of thousands of borrowers will be in deep trouble when a downturn hits.

Indeed, according to the New York Fed, more than 1 million more Americans are behind on their car loans now than at the peak of delinquencies in 2010 after the financial crisis.

“The big lenders who do not know their customers are going to have a problem when the economy turns,” Tormohlen says.

“LIVE BEYOND YOUR MEANS”

Expensive older used cars are exacerbating the problem and it may take years for them to return to more affordable levels.

George Augustaitis, director of automotive industry analytics at CarGurus Inc (O:CARG), an online marketplace for new and used cars, said late this spring his team started to notice an “accelerating decline” in the number of available vehicles under $10,000, which typically would include vehicles between eight and 12 years old.

In an analysis for Reuters, CarGuru’s data shows a falling share of inventory of Great Recession-era cars, while the number of online “leads” from consumers seeking those vehicles has remained steady.

In fact, the average American car is the oldest on record, according to IHS Markit, and CarGurus’ Augustaitis said the available inventory of vehicles costing under $10,000 will not return to more normal levels until 2022, reflecting rising car production after the Great Recession.

Ken Shilson, president of the National Alliance of Buy Here, Pay Here Dealers (NABD), said American consumers have become too comfortable with debt and subprime customers have been “poisoned” by easy access to capital for much of the long economic expansion. But he added those customers will be forced by tighter underwriting to seek even older vehicles.

“The American way is to always live beyond your means and Americans aren’t good at making life adjustments,’ Shilson said. “But there’s a reality check coming and many subprime buyers will be forced to find more affordable transportation.”

Wolves would only be able to register 23 players instead of...