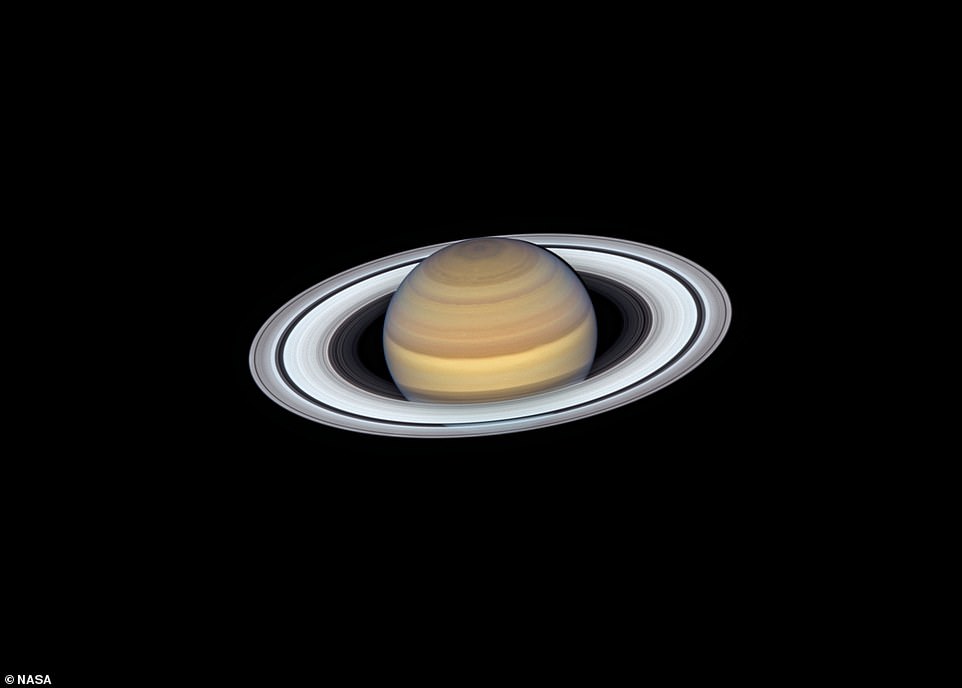 This long-exposure photograph of Saturn, taken by the Hubble Telescope and released by NASA and the European Space Agency, is the most recent image of the ringed planet and captures it in ‘unprecedented’ detail, the space agencies said 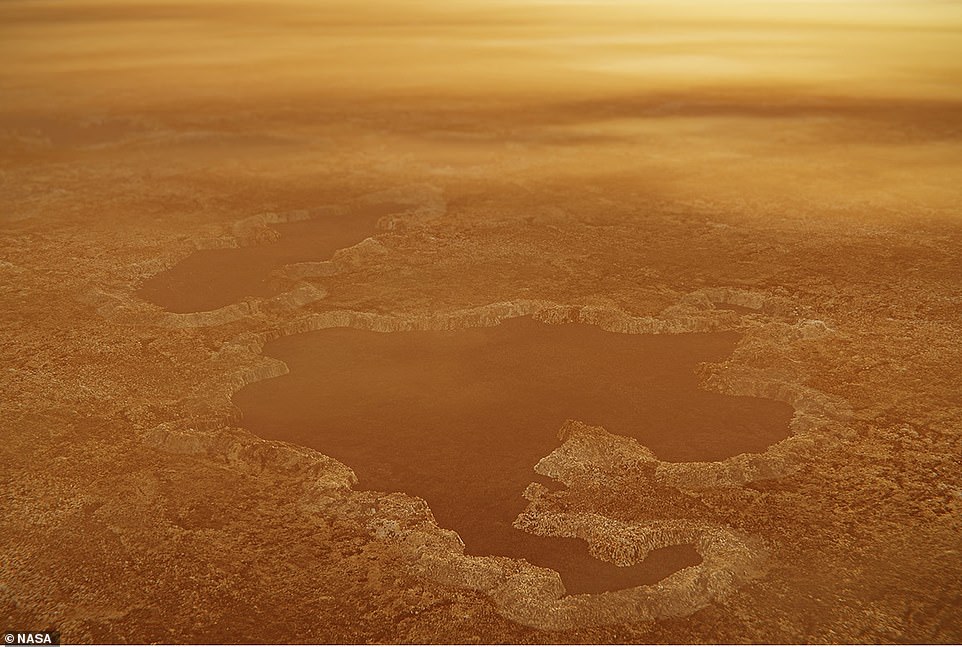 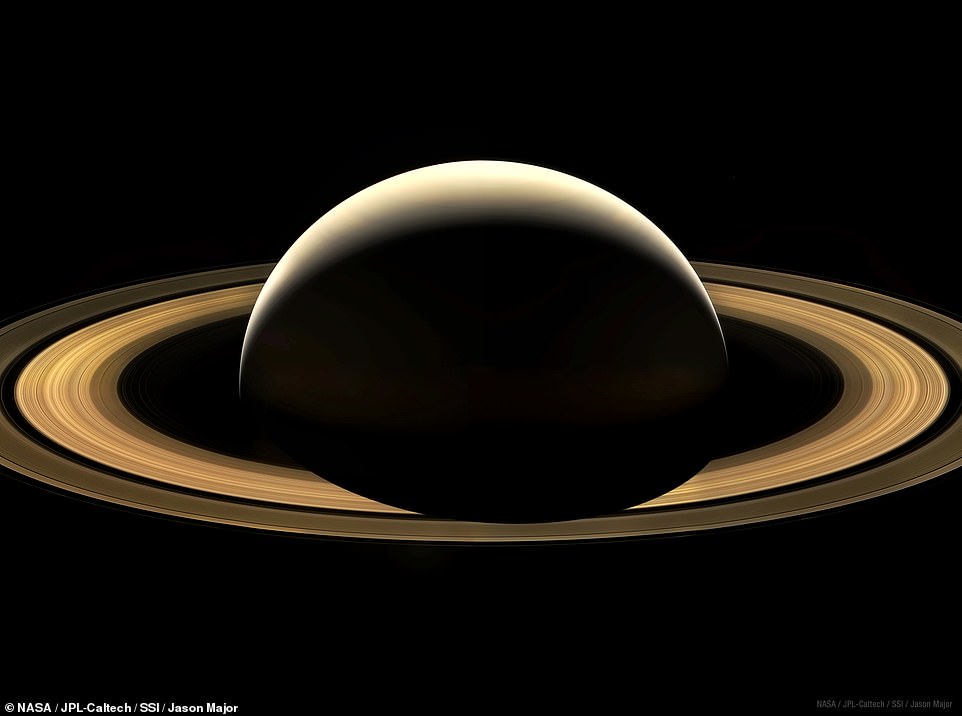 Saturn’s moon, Titan, is the only planetary body in our solar system other than Earth known to have stable liquid on its surface

An artist’s impression of the Cassini spacecraft studying Saturn

Cassini didn’t just study Saturn – it also captured incredible views of its many moons. In the image above, Saturn’s moon Enceladus can be seen drifting before the rings and the tiny moon Pandora. It was captured on Nov. 1, 2009, with the entire scene is backlit by the Sun

NASA has unveiled its latest pictures of Saturn as it makes its annual ‘close pass’ to Earth and outlines in ‘unprecedented clarity’ the changes in the planet’s turbulent atmosphere.

The shots from the Hubble Telescope’s Wide Field Camera 3 shows that last year’s powerful storm has vanished from the north polar region.

But there are smaller storms visible, with them sliding into view and ‘popping like popcorn kernels in a microwave’ before disappearing, NASA said.

The planet is usually photographed by moving satellites which are not able to capture them in as much detail as the Hubble, which photographs it once a year when it is at its closest point to Earth.

The banded structure of Saturn has also changed in colour slightly in last year.

Its amber colours, which come from summer smog-like hazes, but change slightly during different seasons. It was summer on the north pole when the picture was taken.

Yet there are some aspects of the gas giant that have stayed the same, with its mysterious six-sided pattern – known as the ‘hexagon’ – still in place on the north pole.

The hexagon, which was discovered in 1981 by NASA’s Voyager 1, is caused by a high-speed jet stream.

The pictures, taken on June 20 this year by the Outer Planets Atmosphere Legacy (OPAL) project, also gives people a stunning view of Saturn’s iconic rings as they tilt towards Earth as it made its closest approach to us this year.

It was approximately 845million miles away at the time.

The numerous ringlets and fainter inner rings can be seen in the high-clarity photograph, which NASA said was of the quality taken before by spacecraft visiting the planet.

OPAL is trying to understand gas giant planets’ atmospheres and how they change over time.

On Tuesday NASA revealed that methane lakes on Saturn’s moon Titan may be ‘explosion craters’ caused by warming nitrogen.

The researchers suggested an alternative to the long-held theory the lakes were formed by liquid methane dissolving the rock below.

It comes after scientists received new data from the Cassini Saturn Orbiter — a mission managed by NASA’s Jet Propulsion Laboratory in Pasadena, California.

Their work presents a new scenario to explain why some of the methane-filled lakes are surrounded by steep rims that reach hundreds of feet high.

Titan is the only planetary body in our solar system other than Earth known to have stable liquid on its surface.

Original theories suggested these lakes were the result of liquid methane dissolving the moon’s bedrock of ice, carving reservoirs that filled with the liquid in a similar way to Earth’s karstic lakes.

The new, alternative model turns that idea upside down by suggesting pockets of liquid nitrogen in Titan’s crust warmed, turning into explosive gas that blew out craters, which then filled with liquid methane.

This explains why some of the smaller lakes near Titan’s north pole, like Winnipeg Lacus, appear in radar imaging to have very steep rims that tower above sea level.

These rims were difficult to explain with the previous model which suggested the holes were created by fluid flowing in, which would likely create smoother, flatter rims.

But gas blasting out could be responsible for producing these harsher peaks with extreme force pushing the rock upwards.

An international team of scientists led by Giuseppe Mitri of Italy’s G. d’Annunzio University made the discovery after surveying the new images.

‘The rim goes up, and the karst process works in the opposite way,’ Mitri said.

‘We were not finding any explanation that fit with a karstic lake basin. In reality, the morphology was more consistent with an explosion crater, where the rim is formed by the ejected material from the crater interior. It’s totally a different process.’

In 2000 it spent six months studying Jupiter before reaching Saturn in 2004.

In that time, it discovered six more moons around Saturn, three-dimensional structures towering above Saturn’s rings, and a giant storm that raged across the planet for nearly a year.

On 13 December 2004 it made its first flyby of Saturn’s moons Titan and Dione.

On 24 December it released the European Space Agency-built Huygens probe on Saturn’s moon Titan to study its atmosphere and surface composition.

There it discovered eerie hydrocarbon lakes made from ethane and methane.

In 2008, Cassini completed its primary mission to explore the Saturn system and began its mission extension (the Cassini Equinox Mission).

In 2010 it began its second mission (Cassini Solstice Mission) which lasted until it exploded in Saturn’s atmosphere.

In December of the following year it tracked the transit of Venus to test the feasibility of observing planets outside our solar system.

In March 2013 Cassini made the last flyby of Saturn’s moon Rhea and measured its internal structure and gravitational pull.

In July of that year Cassini captured a black-lit Saturn to examine the rings in fine detail and also captured an image of Earth.

In April of this year it completed its closest flyby of Titan and started its Grande Finale orbit which finished on September 15.

‘The mission has changed the way we think of where life may have developed beyond our Earth,’ said Andrew Coates, head of the Planetary Science Group at Mullard Space Science Laboratory at University College London.

‘As well as Mars, outer planet moons like Enceladus, Europa and even Titan are now top contenders for life elsewhere,’ he added. ‘We’ve completely rewritten the textbooks about Saturn.’