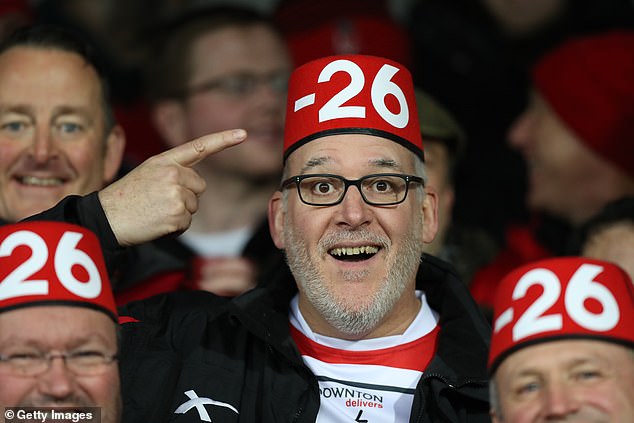 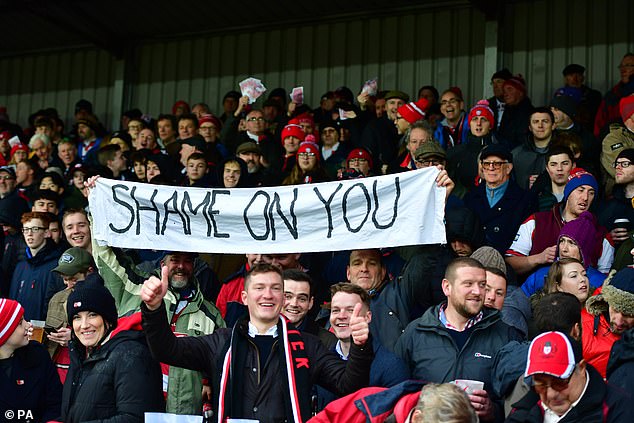 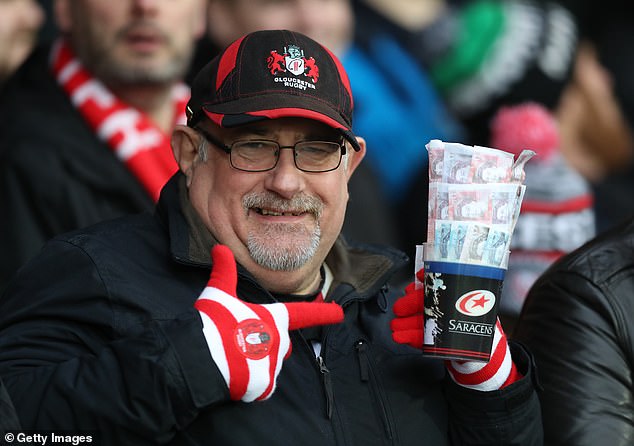 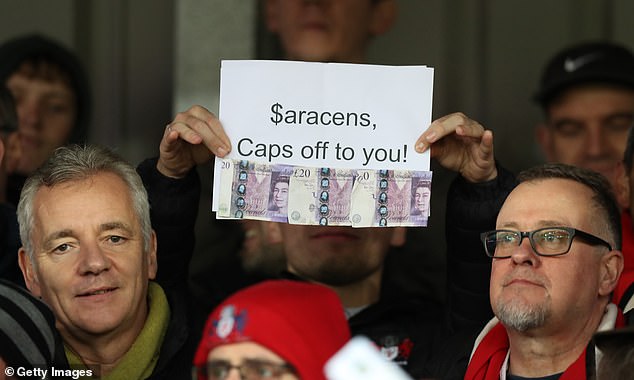 One fan holds up a piece of paper saying ‘$aracens, Caps off to you!’ with £20 notes attached

The clock was yet to strike 12, but with the lager already flowing at the Deans Walk Inn, Gloucester’s fans were certainly keen to rub salt in Saracens’ wounds from the first whistle.

‘I had the Fez left over from a Madness gig at Kingsholm for yours ago and my wife is going to go mad when she realises all the monopoly money is missing,’ said Cherry and Whites season ticket holder Chris Marsden as he sipped a pint and talked over English rugby’s biggest talking point.

‘I had to take these chocolate coins from the kids’ Christmas stockings. They will have to be replaced.’

There was only one topic on the supporters’ lips at Kingsholm and the pubs around the ground – Saracens’ docking of 35 points and a £5million fine for breaching Premiership Rugby Limited’s salary cap regulations.

This was Saracens’ first game since the ruling shocked the division earlier in the week.

Waving his monopoly money and coins as he walked into the Shed – Kingsholm’s wall of noise and most vociferous stand – Mr Marsden, 48, and his fellow supporters were bang up for battle.

Fake £50 notes and monopoly money were thrown in the air. Bill Turner, Mark Ford and Phil Bennett – ‘Not that Phil Bennett,’ he joked – each wore a Fez with ‘-26’ on the front – the total points Saracens had dropped to before kick-off, subject to the start of their upcoming appeal process.

Fans from both sides also wore hats with vegetables taped to the side, their ‘celery caps’ a questionable play on words on Saracens’ salary cap plight.

‘The financial penalty is a joke. The general feeling among Gloucester fans is this has been a long time coming,’ said Bennett, delighted with his impromptu Fez, purchased for £4 from Amazon.

‘To have a man of the calibre and class of Chris Robshaw call what Saracens have done cheating sums it up for me.

‘I feel sorry for their players, but my feeling is the Saracens management shouldn’t be allowed in or anywhere near a Premiership ground until we know for sure they are definitely playing by the rules. We want a level playing field and we don’t have that at the moment.’

Keen to have a laugh at Saracens’ expense, Gloucester’s raucous home supporters booed their team’s opponents on to the field, but their good mood didn’t last long once the action started. As Saracens pulled clear, their ire turned on referee Craig Maxwell-Keys.

The mood in the Shed turned feral, fuelled by frustration at Gloucester’s poor performance and Saracens’ fine display.

‘How’s your company going, Wigglesworth?’ one fan roared at away scrum-half Richard Wigglesworth, the veins throbbing at his temple. Wigglesworth is one of the Saracens players to be involved in the business world with club owner Nigel Wray, something which has contributed to the salary cap breach.

‘Same old Sarries, always cheating,’ was heard throughout the game. As expected, Saracens fans were few and far between, but they watched their team come through a week of adversity to deliver an impressive performance.

It left the Shed to voice their anger and the few who had made it down from north London to return home happy.

‘Nothing has been proved yet, but they are already trying to take away our titles,’ said Saracens fan Duncan Hanton, the celery flopping out from his woollen hat amid the pouring rain.

‘Chris Robshaw and Harlequins have been very vocal, but people in glass houses shouldn’t throw stones. We are not trying to hide anything. We’ve given everything to England in terms of the World Cup players and then for this to happen straight away has been a real kick in the proverbials.’