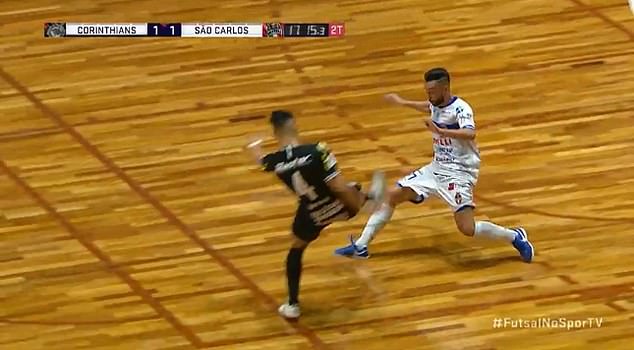 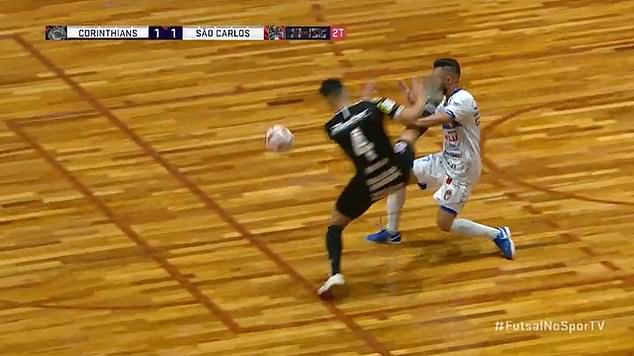 However, the Brazilian follows through with his right foot and kicks his opponent in the face 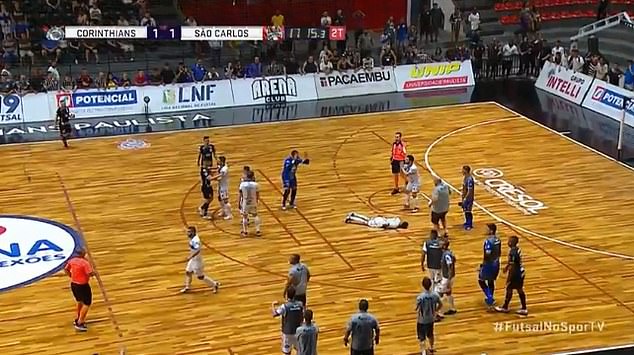 He was eventually taking away on a stretcher after regaining consciousness

A futsal player was knocked out after a brutal tackle by a rival, who was red-carded as his victim lay unconscious on the floor.

Match footage showed Brazilian Daniel Batalha following through with his right foot and kicking his opponent, Fernandinho, in the face in an assault of the kind normally seen in karate or cage-fighting.

The shocking images needed no words during a TV slow-motion replay which left it clear just how dangerous the tackle had been.

Others players and officials could be seen putting their hands to their heads and summoning urgent medical attention as the injured man lay face-down and unresponsive on the ground.

He was out cold for a few seconds before regaining consciousness and being taken away on a stretcher to hospital for a check-up.

The incident happened during a weekend match between Brazilian sides Corinthians and Intelli de San Carlos.

The man on the receiving end of the brutal kick was named as Intelli de San Carlos player Fernandinho.

Batalha was sent off, although his team ended up winning 4-2 despite the score being 1-1 when he kicked his rival.

One local paper branded the foul the ‘worst of the 21st century.’

An angry Intelli de San Carlos supporter took to social media to call Batalha a ‘criminal’ and said he should have been arrested.

Corinthians fan Valter Oliveira said: ‘Shameful incident. The punishment for the Corinthians player should be exemplary. And I’m speaking as a supporter of the team.’

Futsal is a variant of association football played on a hard court normally indoors which is smaller than a football pitch. It is similar to five-a-side football.

Cricket is back… sort of! Rain likely to delay start of England vs West Indies first Test at Ageas Bowl as Ben Stokes prepares...

'I think we are in a good place': Trump DISAGREES with...

Health expert claims Americans will be wearing masks and doing 'some...