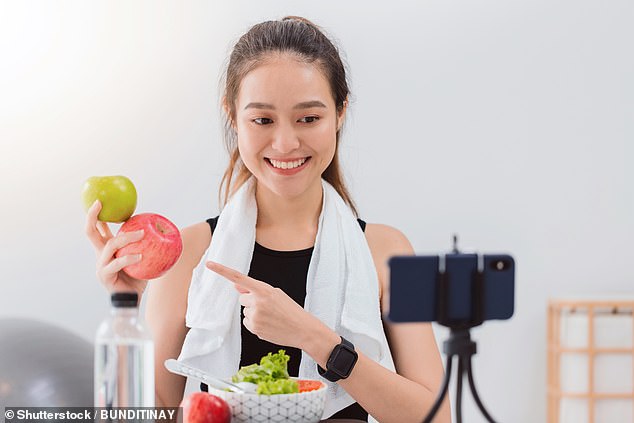 Social media gives us immediate, cheap access to health information, empowering many people to make a change – but experts warn that not all trendy information is true (file)

Nearly half of Americans trust strangers on social media to advise them about their health and fitness routines, a new survey reveals.

The average American spends nearly two-and-a half hours a day on social media, and the new poll from the Cleveland Clinic and Parade magazine shows that many of us are making life changes based on what we scroll through.

Respondents were most likely to try a natural remedy, switch up their fitness regimes or adopt a new diet after seeing that online influences had done so.

Social media has given people worldwide unprecedented access to more immediate, cheaper health and wellness information – but experts warn that there’s a lot of bad advise out there, and it may be difficult to identify.

Screens are a near-constant part of our lives – so much so that a third of Americans said they spend more time socializing online than in person, according to the new survey.

And when we see an influencer with followers in the tens of thousands or even millions, it’s easy to assume they must be doing something right.

But the fact that something is trendy online doesn’t make it true in real life, warns Cleveland Clinic’s director of Functional Medicine, Dr Mark Hyman.

‘There can be a lot of false health claims out there, so it’s important to ask where that information or advice is coming from,’ he advised.

For example, a 2018 study conducted by George Washington University found that the Twitter accounts tweeting most prolifically against vaccination were Russian trolls and bots.

And as they were doing so, the proportion of Americans keeping their kids from getting shots was rising – and so were US measles rates.

According to the latest edition of the annual survey, 20 percent of those who had taken any advice from online influencers had tried a natural remedy.

That’s a broad category that could include everything as innocuous as chamomile for anxiety to CBD oil instead of a chemotherapy for cancer.

Over the last year-and-a-half, an Oregon mother has been enthralled in a court battle over the care of her 13-year-old daughter with a rare liver cancer because she wants to treat the girl solely with CBD oil.

A judge ordered that the girl be scheduled for surgery, then cancelled the order, and the case is ongoing. The mother’s insistence on the alternative, unproven treatment has whipped up a storm of controversy.

Among those who’d found wellness inspiration on social media, 18 percent had changed up their fitness regimen.

Another 18 percent had tried a new diet or changed the diet they were on.

The trendiest diets were intermittent fasting, tried out by 36 percent of those who tried online-inspired changes, followed by plant-based diet and the Keto diet praised by celebrities like Kim Kardashian West and LeBron James, but panned by many doctors.

Encouragingly, cutting the amount of sugar they ate – a move well-demonstrated to help lower obesity, diabetes and heart disease risks – was a top dietary priority for 72 percent of respondents.

The study also found that Americans are more than open to virtual medicine, with 22 percent saying the would gladly consult a doctor via video chat.

The findings could signal an opportunity for more health care professionals to jump into the influencer mix and give their patients access to vetted health information on the platforms they already trust.

Fury over 'utterly disgusting' decision to stop free hospital parking for NHS workers once the Covid-19 outbreak is over as the British Medical Association...

REVEALED: 87% of meat and poultry plant workers who were infected...