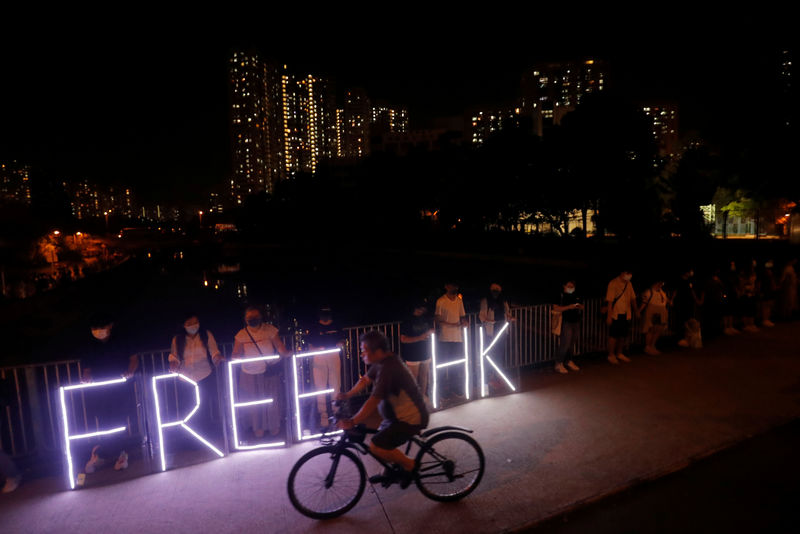 HONG KONG (Reuters) – Several pro-democracy protests are planned for Hong Kong on Saturday reflecting the widespread anger at the government, ranging from an elderly sit-in, a face mask party, a shopping mall demonstration and an anti-emergency law street march.

Hong Kong’s protests started in opposition to a now-abandoned extradition bill but have mushroomed in four months into a pro-democracy movement and an outlet for anger at social inequality in the Asian financial hub.

Hong Kong has experienced relative calm since last weekend, when a peaceful march by tens of thousands spiraled into a night of running battles between protesters and police.

Since then there have only been small nightly protests and activists have not flagged any major action this weekend.

The protests have plunged the city into its worst crisis since Britain handed it back to China in 1997 and is the biggest popular challenge to Chinese President Xi Jinping since he came to power in 2012.

A group calling itself the “Silver-Haired Marchers” plans a 48-hour sit-in at police headquarters from Saturday.

“Whilst we may not be able to fight alongside the young protesters in the frontline against an unjust government, escalating police violence and indiscriminate arrests, we take it to heart to uphold the core values of Hong Kong and defend the future of our younger generations,” it said in a statement.

“We, the old but not obsolete Silver-Haired Marchers, will be holding a press conference this Saturday Oct. 12 to announce a rally we are arranging.”

Colonial-era emergency laws were introduced a week ago banning face masks at public rallies, sparking some of the worst violence since the protests started. Protesters use masks to shield their identities.

However, hundreds of people, including school children and office workers, have since defied the ban and wore face masks. A group of protesters plan a “face mask party” on Saturday night.

Hong Kong’s police, once praised as “Asia’s finest”, are also facing a crisis of confidence amid the worsening political tensions. Protesters accuse them of using excessive force, a charge police deny, and two protesters have been shot and wounded during skirmishes with police.

Hong Kong is also facing its first recession in a decade due to the protests, with tourism and retail hardest hit.

Many shops have been shutting early to avoid becoming a target of protesters and due to closures of the metro rail system after several stations were torched and trashed.

Metro operator MTR Corporation said services would end at 10 p.m. (1400 GMT) on Saturday and the express train linking the airport with the city would not stop at stations in between from 3 p.m. local time.

The Hong Kong Jockey Club said it would close eight off-course betting branches and shut another 20 early on Saturday to protect its employees.

Many fear China has been eroding Hong Kong’s freedoms, guaranteed under a “one country, two systems” formula introduced with the 1997 handover.

The now-withdrawn extradition bill, under which residents would have been sent to Communist-controlled mainland courts, was seen as the latest move to tighten control.

China denies the accusation and says foreign countries, including Britain and the United States, are fomenting unrest.

U.S. President Donald Trump said in announcing a partial trade deal with China on Friday that he had raised Hong Kong in the talks after previously warning that a deteriorating situation in the city could affect the negotiations.

'It gives you less confidence in it': Leicester boss Brendan Rodgers...