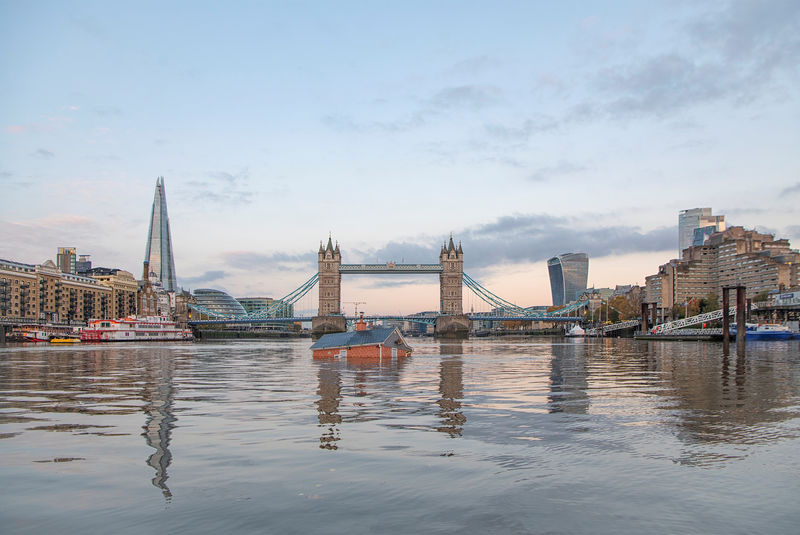 LONDON (Reuters) – A floating mock-up of a typical British suburban home was seen slowly sinking into the Thames in central London on Sunday in a protest organized by Extinction Rebellion to demand politicians fighting a Dec. 12 general election act on climate change.

A white microwave oven bobbed in the water next to the large model house, complete with drainpipes and chimney stack, which wallowed half-submerged in the river’s brownish waters not far from Tower Bridge.

Extinction Rebellion staged the protest as parts of northern and central England were struggling with the aftermath of floods that began last week when severe storms brought a month’s rainfall in less than 24 hours.

“We are watching, in real-time, as people’s lives are destroyed around the world and in the UK; unless action is taken to halt biodiversity loss and reduce greenhouse gas emissions to net zero, these tragedies are set to worsen,” Extinction Rebellion said in a statement.

The danger climate change poses to societies around the world were underlined last month when a study found that 300 million people would be at risk of coastal flooding by 2050 — three times the number previously thought.

The study by Climate Central, a U.S.-based climate science organization, showed that large parts of London and coastal and low-lying areas in Britain would be among the areas at risk unless adequate sea defenses were built.

“Despite our government’s denial, this is a national disaster creeping ever closer to the capital,” Extinction Rebellion said.

The group, which was launched in London just over a year ago, has organized colorful protests and mass acts of civil disobedience in Britain and other countries to press its demands for faster action to cut emissions and halt the accelerating loss of plant and animal species.