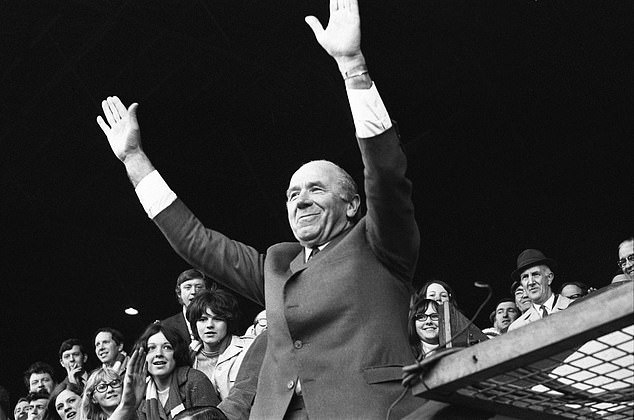 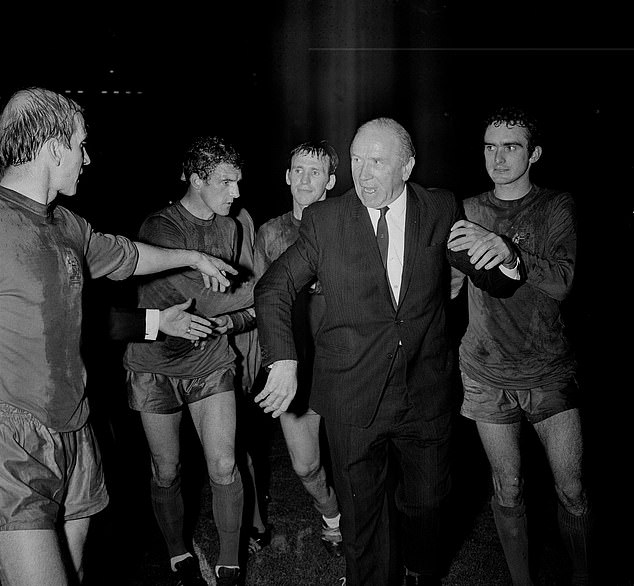 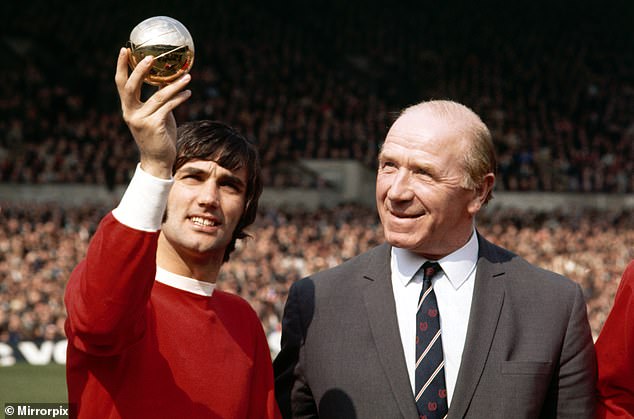 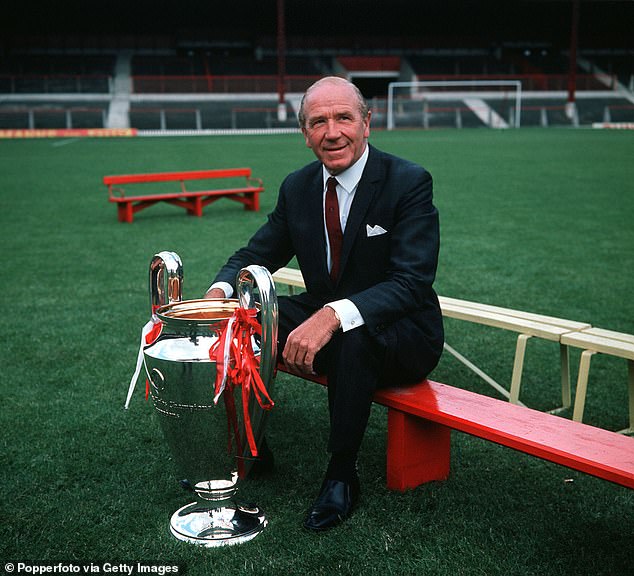 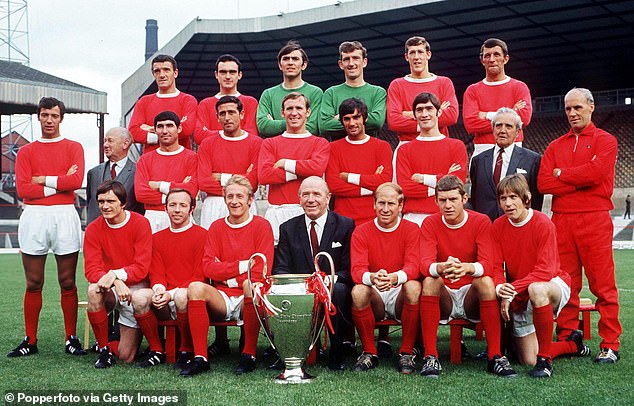 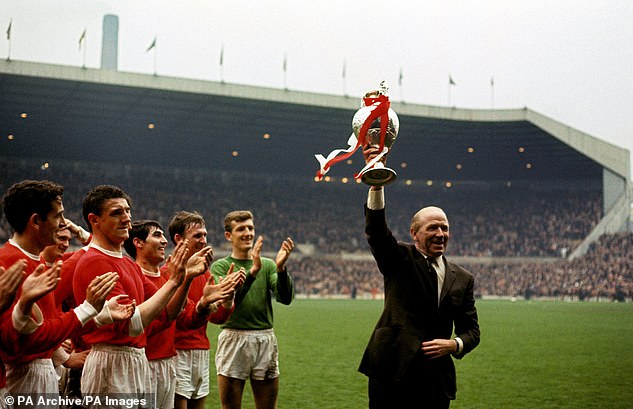 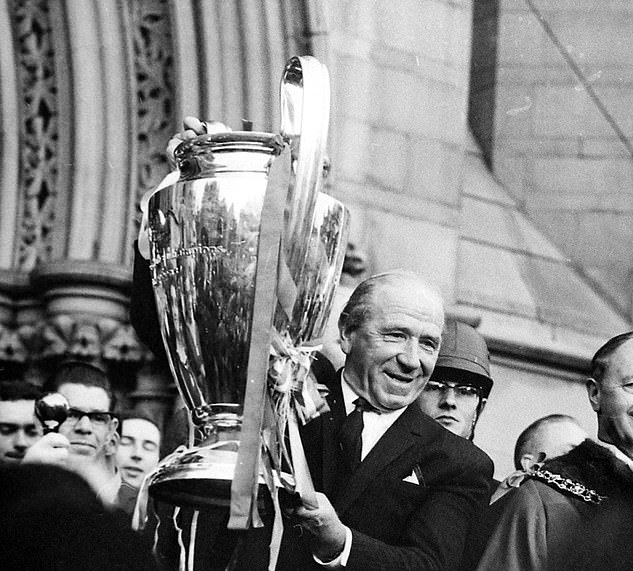 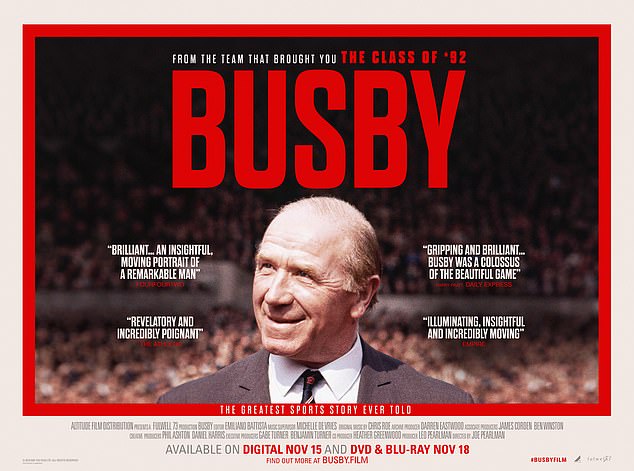 The history of Manchester United is littered with men who embody the never say die philosophy of the great club.

None more so than Sir Matt Busby, a man widely regarded as not just the finest football manager to ever grace the sport, but one of the great figures in sport full stop.

His relationship with the footballing powerhouse is one steeped in history, success and of course tragedy.

And a new documentary movie, from the makers of Class of 92, has attempted to do justice to him and his 25-year managerial tenure at the great club and all that it encompassed.

While the story is well-known, the beauty of the Joe Pearlman-directed production is its rare footage and interviews with figures that worked closely with Busby, including his ‘Babes’ and the men from ‘The Class of 92’ who followed suit.

John Aston Jr, man of the match in the 1968 European Cup final win versus Benfica, puts it simply: ‘Matt Busby is Manchester United.’

United, as we know the club right now, is the under-performing sleeping giant, but you would do well to find someone brash enough to claim they are not one of the world’s heavyweights.

And while another Scot, Sir Alex Ferguson, delivered a considerable chunk of their success – it was Busby who laid the foundations.

‘He had a very good apprentice in Alex Ferguson, but he’s the man who built it up and he’s the guy who put Manchester on the world map,’ Aston added.

Busby is indeed the man who built Manchester United up, especially after the aforementioned foundations were shaken to their core during the First World War. Then again after the Munich air disaster killed 23 people, including players, club staff and journalists, on the way back from a European Cup tie in Belgrade in 1958.

The man himself was left close to death and received his final blessings more than once.

It’s at this point in the movie that the atmosphere becomes palpable and tense, and you come out the other side with a sense of just what Busby went through and managed to overcome to drag United to glory in the coveted ’68 European final.

Cameos from former players Denis Law, Paddy Crerand, Eamon Dunphy, Bobby Charlton, and Alex Stepney, as well as Busby’s successor Wilf McGuinness add extreme emotion to the recounting of the sequence of events leading up to the disaster and the renaissance afterward.

‘If you get a dictionary and look up the word “resilience”, I would say that Sir Matt Busby is there,’ said director Joe Pearlman. ‘He epitomises that more than anyone.

‘To become what he became and to establish Manchester United as this incredible club, it’s just mind-blowing to have the opportunity to be able to look into this man’s story and tell it.’

Busby, from a small town in North Lanarkshire, took over at United in October 1945 with Old Trafford decimated by Nazi bombs.

He had enjoyed a playing career with United’s fierce rivals Manchester City and Liverpool and was seen as a risky appointment.

He stayed for 25 years, won five league titles, two FA Cup triumphs and his crowning glory, the 1968 European Cup triumph, before he passed away in 1994, aged 84.

The film is dense with archive footage and reports that give a fascinating sense of Busby’s management, his shrewd business dealings in particular.

A main theme is the road to European success and although you know the score and the history, you find yourself celebrating the toppling of Benfica as if you were watching it live.

There is also a poignant portrayal of the semi-final close scrape with Real Madrid that threatened to derail Busby’s life’s work.

‘He was looking at the faces that weren’t there,’ said former player Ronnie Cope, describing the scenes when Busby – still limping from his Munich injuries – addressed his locker room with United 3-1 down at half-time.

He was, of course, referring to the death of the Busby Babes, a young and exciting crop of players cultivated by the Scot.

‘Can you imagine, we’re sitting in the dressing room in Madrid in 1968, losing 3-1, and Matt comes in to have a go at us,’ Crerand told The Independent. ‘And he never swore once.’

‘Go out and enjoy yourselves.’

That was the simple message that he delivered. And it worked.

Goals from David Sadler and Bill Foulkes after an OG from Ignacio Zoco saw Busby’s side silence the Bernabeu and go on to win the tournament at Wembley in front of over 90,000.

That was the culmination of Busby’s life work, and it allowed him to retire the next year, something he had already intended to do.

‘To rebuild in such a short space of time – not just to get the club up and running again, but to become European champions… It wasn’t until I was 30 so when I sat down one day and I thought, what an achievement,’ Aston, who was 20 at the time, said.

Busby, along with Ferguson, are remembered as the titans of Manchester United – men who gave youth a chance, a modus operandi that started with Busby and has filtered through to this day.

‘Matt has a name that resounds around football, like Brian Clough or Bill Shankly – for different reasons – for producing a ‘footballing’ club,’ concludes Jimmy Murphy Jr.

‘They emphasised that young players could make it… if given a chance.’

Aston remembers him as a ‘moral man’ with ‘a tremendous presence’, noting how ‘when he used to appear in the dressing room a sort of silence fell’.

'I've spent longer on a sponsored walk than I did as manager of Nottingham Forest!': 20 years on from their treble at Celtic, Chris...