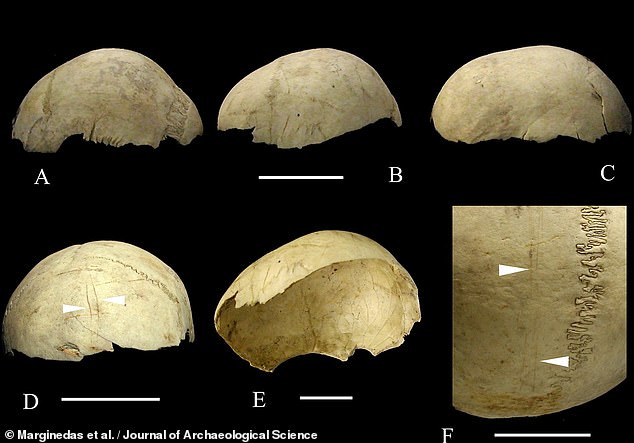 Human heads were systematically butchered and ritually scooped out — leaving bowl-like remains dubbed ‘skull cups’ — as late as in Bronze Age Europe, a study has found 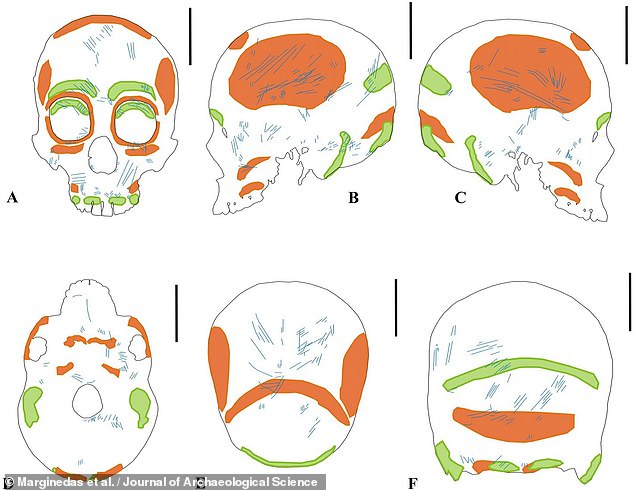 By examining tool marks on the insides of the skulls from their study sites, the team were able to recognise potential evidence for ceremonial practices. Pictured, marks on a skull found in Gough’s Cave, in the UK. Cut marks are shown in blue, while the orange and green colourations represent areas of muscle attachment 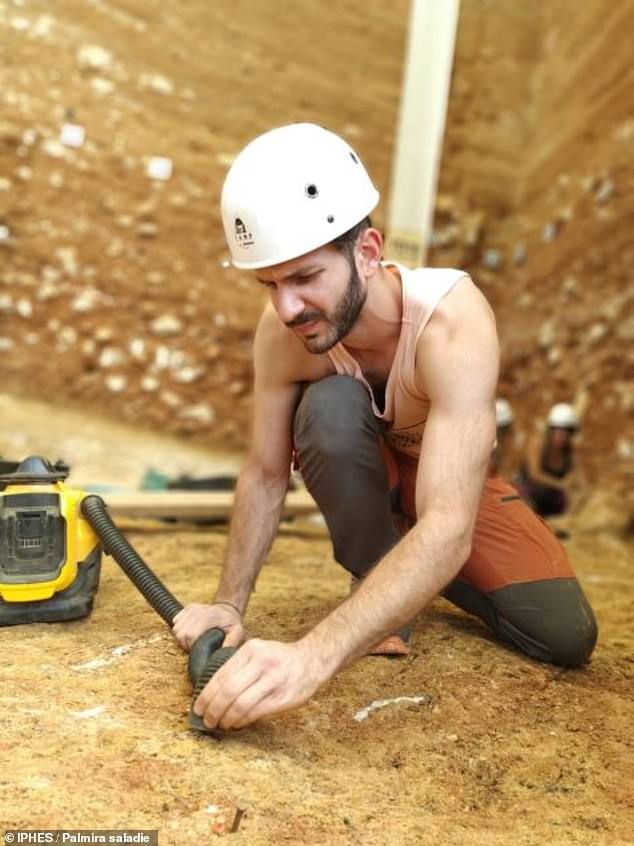 An international team of researchers led by evolutionary anthropologist Francesc Marginedas of the Rovira and Virgili University of Tarragona, pictured, found evidence that skulls were processed in a consistent manner for a total of around 15,000 years 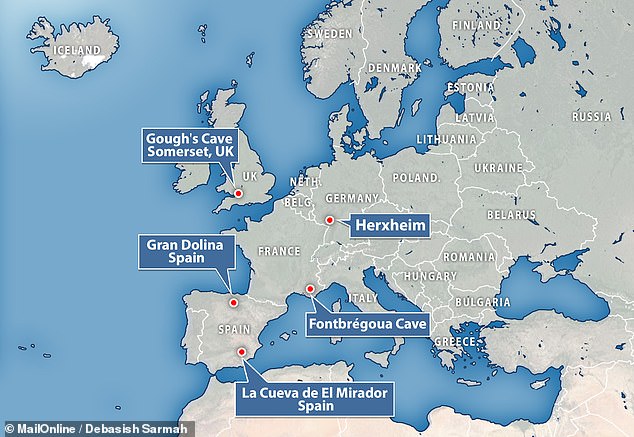 Researchers studied skull cups from three ancient sites — Gough’s Cave in the UK, Herxheim in Germany and El Mirador Cave in Spain. They compared these with human skulls — which had not been made into bowl-shapes — from Fontbrégoua Cave in France and Gran Dolina in Spain

Human heads were butchered and ritually scooped out — to leave bowl-like remains dubbed ‘skull cups’ — as late as in Bronze Age Europe, 4,000 years ago.

An international team of researchers found evidence that skulls were processed in a consistent, systematic manner for a total of around 15,000 years.

It is not clear exactly what the skull cups were made for, but the tool marks left on their surfaces suggests they were worked for both their meat and another purpose.

Experts have previously suggested that skull cups may have been used as containers or drinking vessels, as war trophies or even masks or decorative items.

Evolutionary anthropologist Francesc Marginedas of the Rovira and Virgili University of Tarragona in Spain and colleagues studied skull cups from three ancient sites — Gough’s Cave in the UK, Herxheim in Germany and El Mirador Cave in Spain.

They compared these with human skulls that had not been found in bowl-shapes from Fontbrégoua Cave in France and Gran Dolina in Spain.

The skull cups date from from the Upper Palaeolithic, around 20,000 years ago, to the Bronze age, about 4,000 years ago.

The ritual use of human skulls has already been documented in several archaeological sites of different chronologies across the globe.

Such practices are thought to be related to the creation of war trophies, masks, decorative and engraved elements and what are referred to as ‘skull cups’.

Experts think that some ancient societies even believed that human skulls possessed a life force or certain powers — and were thus collected after violent confrontations as symbols of authority and superiority.

By examining tool marks on the insides of the skulls from their study sites, the team were able to recognise potential evidence for ceremonial practices.

Ritually-treated skulls are known to often sport signs in the form of cut marks — produced by stone tools or metal knives — left behind during the scalp removal process.

Such practices, for example, are archaeologically well-documented among the American Paleo-Indians, who left behind skulls with circular arrangements carved around the head.

Based on such previous examples, the researchers developed a method to statistically analyse whether marks found on the skulls from the study sites were created as part of some form of similarly consistent processing technique.

The team found that there is a specific pattern formed by systematic skull treatments that were perpetrated in the same fashion for almost 15,000 years.

The marks appear to have been left behind as the skulls were stripped of their scalp and meat and intensively cleaned.

The same patterns were found on the skulls sourced from all of the study sites — except for the Homo antecessor remains from Gran Dolina.

The researchers believe that the systematic working of the human skulls began with the removal of the scalp and continued with the excision of muscle tissue.

The skulls were then broken to preserve the thickest part of the cranial vault.

While many of the cuts suggest a cannibalistic butchering process, other marks found on each of the skulls suggests a final treatment that served a different intent.

It remains unclear, however, exactly what the processed skulls were used for once they had been stripped clean of their flesh.

Nevertheless, the researchers concluded, ‘the preparation of skull cups can be related to a ritual treatment of the human heads in these archaeological contexts.’

The full findings of the study were published in the Journal of Archaeological Science.

It was a time when sophisticated bronze tools, pots and weapons were brought over from continental Europe.

Skulls uncovered from this period are vastly different from Stone Age skulls, which suggests this period of migration brought new ideas and new blood from overseas.

Bronze is made from 10 per cent tin and 90 per cent copper, both of which were in abundance at the time.

Crete appears to be a centre of expansion for the bronze trade in Europe and weapons first came over from the Mycenaeans in southern Russia.

It is widely believed bronze first came to Britain with the Beaker people who lived about 4,500 years ago in the temperate zones of Europe.

They received their name from their distinctive bell-shaped beakers, decorated in horizontal zones by finely toothed stamps.

The decorated pots are almost ubiquitous across Europe, and could have been used as drinking vessels or ceremonious urns.

Believed to be originally from Spain, the Beaker folk soon spread into central and western Europe in their search for metals.

Textile production was also under way at the time and people wore wrap-around skirts, tunics and cloaks. Men were generally clean-shaven and had long hair.

The dead were cremated or buried in small cemeteries near settlements.

This period was followed by the Iron Age which started around 650 BC and finished around 43 AD.

Renault says reserves the right to seek damages depending on Ghosn...

Air pollution related deaths in the US have declined by 30...