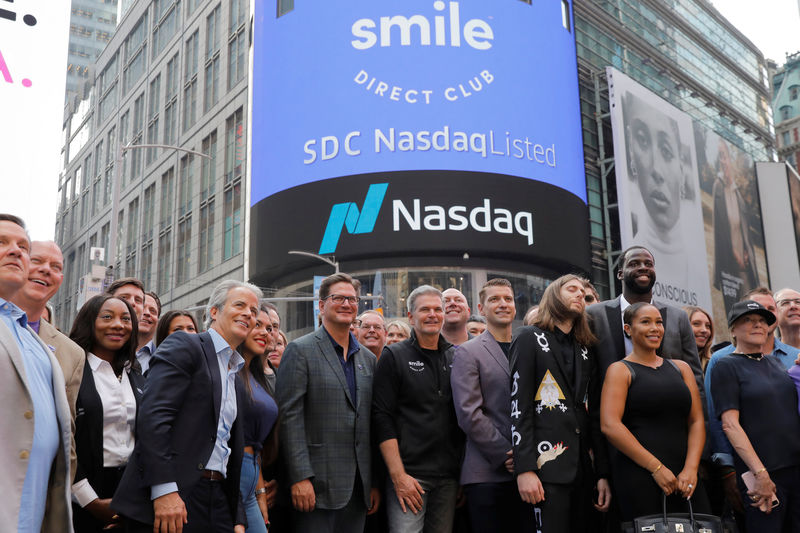 © Reuters. David Katzman (C), CEO of SmileDirectClub celebrates as the company debuts its IPO outside the Nasdaq MarketSite in New York

(Reuters) – Shares of SmileDirectClub (O:SDC), a teeth alignment company, tumbled 10.7% in their market debut on Thursday, after the company’s initial public offering was priced above expectations.

Shares opened at $20.55, giving it a market capitalization of $7.96 billion, if underwriters exercise their option. The company’s shares rose as high as 2.7% from the opening price to $21.10, in early trading.

SmileDirectClub had priced its initial public offering at $23 per share on Wednesday, above its initial target range of $19-$22, raising about $1.3 billion at a valuation of about $8.9 billion.

The Nashville, Tennessee-based company said it intends to use the proceeds toward redeeming LLC units from its pre-IPO investors and fund a dividend to them and also pay bonuses and funding-related tax obligations. (https://

The offering of SmileDirectClub, which sells teeth aligners to customers, comes on the heels of market debuts of loss-making companies such as Uber Technologies (N:UBER) and Lyft Inc (O:LYFT), whose stocks have struggled since going public.

J.P. Morgan and Citigroup (NYSE:C) served as lead underwriters to the IPO.

Another IPO hopeful, WeWork owner The We Company, is looking to go public, despite opposition from its largest investor SoftBank Group (T:9984).

WeWork is widely expected to have a disappointing debut that may value its shares at $15 billion, less than a third of its peak valuation of $47 billion.