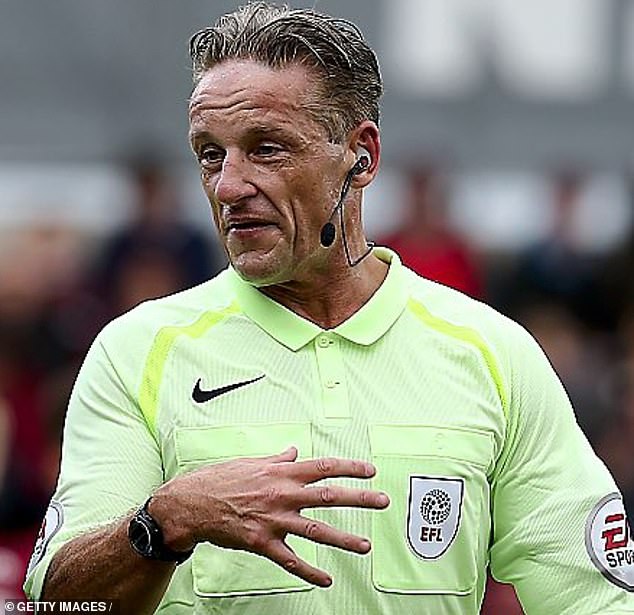 Danny Gratton, originally an assistant referee, was left to take charge of the second half

Crewe beat Accrington Stanley 2-0 in a bizarre FA Cup first round tie which lasted over three hours, saw three referees take charge and the second half played with just one linesman.

Injuries to first referee Neil Hair and his replacement Alan Clayton left Danny Gratton, originally an assistant referee, to take charge of the second half.

And with only one official, Conor Brown, left to run the line, the two clubs incredibly decided to toss a coin to decide which side of the pitch he would patrol.

‘I won and chose our defence for where the official would be,’ said Crewe boss Dave Artell. And Stanley boss John Coleman said: ‘A coin toss to decide a liner! Bizarre. I have never known that before, it’s a new one on me.’

Goals from Charlie Kirk and Chris Porter gave the League Two promotion chasers a comfortable win over their League One opponents, who had Mark Hughes sent off for bringing down Owen Dale.

By that time, many home fans had already poured out of the Wham Stadium with the game eventually ending more than three hours after it had kicked off. ‘That was a really testing afternoon but the players handled it well,’ added Artell.

There had been a 70-minute delay at the end of the first half as the clubs tried to work out a way forward with two of the officials injured and out of action.

Several fans offered to step in before Accrington sought advice from the FA who insisted the game could be completed with just two officials.

Artell said: ‘There was a Crewe fan who is a Level 5 referee and Accrington assistant manager Jimmy Bell, his son is a referee and he was in the ground, but they felt it wasn’t fair on either, nor to get the assessor to do it. Mr Hair was on the phone at half-time to Mike Jones at the Referees’ Association and the FA as it’s their competition, and they said the game had to continue with one assistant.’

Coleman had no complaints about the result but admitted it was the first time he had ever seen a coin toss to decide which line the assistant referee runs.

‘We could have used a Crewe player’s friend or Jimmy Bell’s son, who were both qualified to run the line, but I just felt that wasn’t fair.

‘The toss of the coin didn’t go my way but I’m not using that as an excuse although decisions did seem to go for them. But that happens when you are on top.

‘It’s not ideal waiting 70 minutes to play but we went out of the FA Cup because Crewe were better than us. That’s the truth and good luck to them.’

Two months after the League One side had crushed Morecambe of League Two 5-1 in the Football League Trophy, Simon Grayson’s men were just as ruthless in this rematch. ‘We were professional,’ said Grayson.