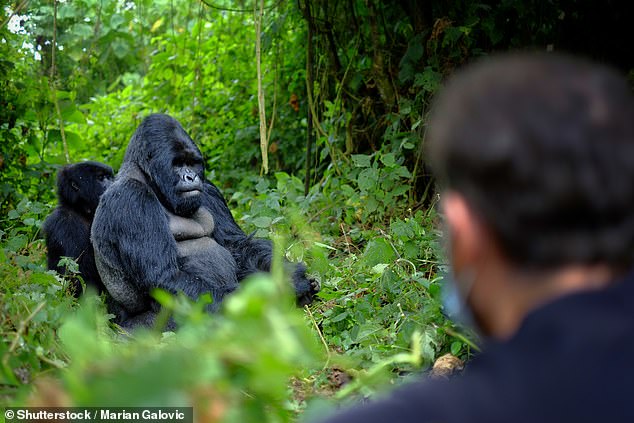 Tourists should take only pictures and leave only footprints, they say. For the mountain gorilla, however, something else is being left behind: deadly diseases (stock image) 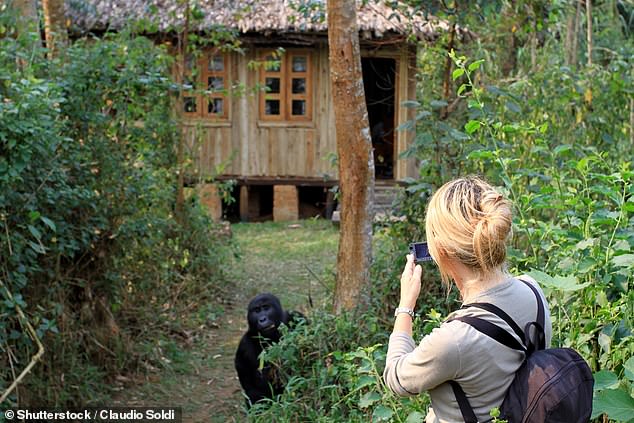 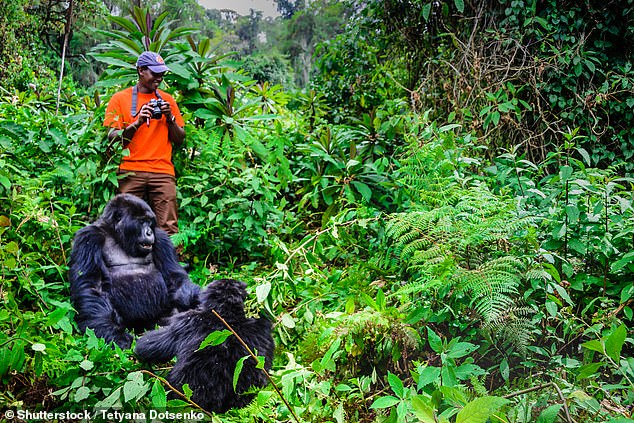 The researchers found that of 643 such images, people had come within less than 23 feet of the gorillas — in violation of the regulations. Pictured, a tourist approaches close to mountain gorilla family in Rwanda’s Volcanoes National Park (stock image) Tourists should take only pictures and leave only footprints, they say. For the mountain gorilla, however, something else is being left behind: deadly diseases.

Ecotourists are ignoring the rules and straying too close to the endangered primates, transmitting human infections, a study of trip photos on Instagram reveals.

Searching the social media site, UK researchers found nearly 643 images showing people getting closer than 23 feet to the gorillas — and even touching them.

This proximity allows for the transfer of coughs, colds and respiratory infections which, if left untreated, have potential to kill gorillas.

Incidents of infections are on the rise in the gorilla populations, with a recent outbreak of human metapneumovirus in Rwanda infecting 11 apes, leaving two dead.

Mountain gorillas inhabit forests in the Democratic Republic of the Congo (DRC), Rwanda and Uganda. They are endangered, numbering at around only 1,000.

Tourists excursions to see the primates are permitted in all three countries — with the caveat that people are supposed to stay 23 feet (7 metres) from the gorillas.

Additionally, visitors in the DRC are supposed to wear face masks on the trips, a rule that Uganda is also set to soon begin enforcing.

To see if the rules were being followed, primate conservationist Gaspard van Hamme and colleagues at of Oxford Brookes University reviewed Instagram photos of people on gorilla treks that had been posted after 2013.

In each possible case, the team estimated the distance between the tourists and the gorillas they had come to see.

The researchers found that of 643 such images, people had come within less than 23 feet of the gorillas — in violation of the regulations.

The team noted that close encounters often appear to be initiated by young gorillas.

He added that the study findings don’t necessarily show that the rules are always being broken, as people could be preferentially posting images where the animals are up close.

‘The goal was not to say that it happens in this proportion of the total – but that it does happen very often,’ Mr van Hamme told the New Scientist.

Similarly, tourists in the DRC could be wearing the mandated masks during most of their excursions, taking them off only for their photographs.

‘But that still presents a risk,’ Mr van Hamme cautioned.

‘Social media is making the problem worse, for sure,’ Gladys Kalema-Zikusoka at the Ugandan charity Conservation Through Public Health told the New Scientist, noting that visitors want to have the same up-close experiences they see online.

Tourism needs to continue, however, she added, noting that such helps fund conservation programmes while encouraging locals to protect the primates.

‘Otherwise, if a gorilla comes into their garden they would kill it.’

‘But the gorillas might be the reason their child has a job.’

Instead, veterinarian Fabian Leendertz of Berlin’s Robert Koch Institute argued to the New Scientist, responsibility must fall to tour operators to better enforce the rules.

‘There’s big variability among the guides,’ he said.

‘People are more likely to give a guide a tip if they get a good selfie.’

The researchers believe that, if the rationale for the rules were better explained, people who care about gorillas would be wiling to keep their distance and wear masks.

‘I don’t think the experience would be less enjoyable,’ said van Hamme.

‘But the pictures may get less likes on Instagram.’

The full findings of the study were presented at the 2019 European Federation for Primatology meeting, which was held in Oxford from September 8–11.

A study published in January 2017 warned that for most of the world’s 504 primate species, it is now ‘the 11th hour’ on earth – with nearly two thirds facing extinction and 75 per cent of populations in decline.

Behind the collapse in numbers is an increase in industrial agriculture, large-scale cattle ranching, logging, oil and gas drilling, mining, dam building and road construction.

The illegal trade in bushmeat – killing apes and monkeys for their flesh – is also decimating the animals, as is changing climates and diseases spread from humans to apes.

Growing trees to produce palm oil – used in many popular foods – is a particular threat to primates in Indonesia, as is mining for gold and sapphires in Madagascar.

With many species living in rainforests, the cutting down of millions of acres of forest to supply the increasing demand for timber or to clear land for agriculture is destroying their habitat and making populations more fragmented.