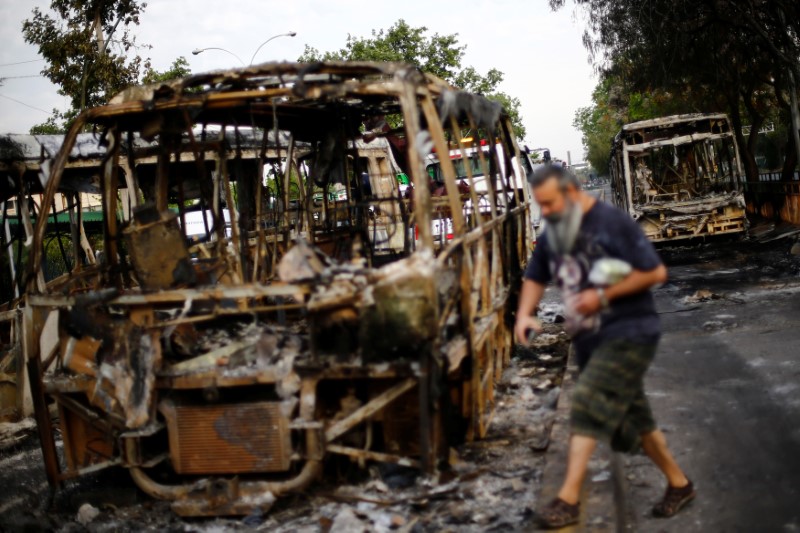 SANTIAGO (Reuters) – Troops were patrolling the streets of the Chilean capital Santiago on Saturday morning, the military confirmed, after President Sebastian Pinera evoked a state of emergency amid a surge in violent protests over a hike in public transport fares.

Javier Iturriaga del Campo, the general designated in charge by Pinera, told a news conference at Santiago’s Moneda presidential palace in the early hours of Saturday that his troops would focus their patrols on “the most conflict-hit areas” but would impose no curfew “for now.”

“The recommendation for people is that they can go home to be with their families and be calm,” he said.

“We are assuming control, deploying our forces in a way that we can prevent continuing acts of vandalism and having a better sense in the morning of what is happening.”

The announcement by a grim-faced Pinera shortly after midnight came after 12 hours of intense unrest in the city center, where protesters clashed with police who used tear gas and water cannons, according to the interior ministry, witnesses and television footage.

Sporting and cultural events have been canceled for the weekend, the metro network remains closed and foreign embassies have updated their security advisories for expatriates and visitors, urging them to avoid crowds and carry identification.

In just over three weeks, Chile is due to host U.S. President Donald Trump, Russian President Vladimir Putin and Chinese President Xi Jinping along with many others for a regional summit of the Asia-Pacific Economic Cooperation. Weeks later it will host other world leaders for the COP25 United Nations climate change summit.

The decision to deploy the military was met with widespread shock in a nation that lived under a military dictatorship for 17 years until 1990.

Political commentators and opposition parties have lambasted the response by Pinera’s government to the protests, which started on Oct. 7 and have grown in intensity amid widespread discontent over the high cost of basic goods and utilities.

Some said he provoked an explosive confrontation by rolling out riot police frequently accused of heavy-handedness instead of seeking dialogue with the protesters.

Lucia Dammert, an expert in public security at the University of Santiago, wrote on Twitter that when there were tanks on the streets “we have all lost.”

“The state of emergency is a measure of last resort, the government had many other tools available to it to calm things down,” she said.

Preston North End get a positive coronavirus test back AFTER their...

The SAGE files: Local lockdowns may prompt attacks on the police,...