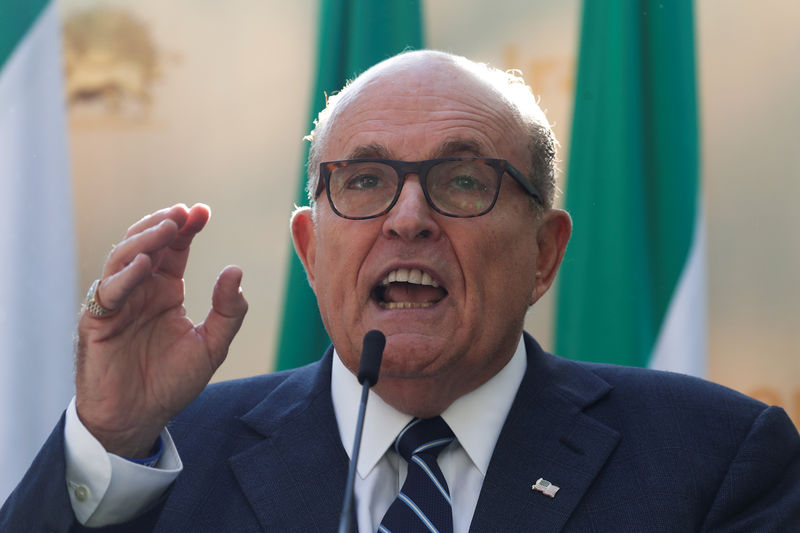 WASHINGTON (Reuters) – U.S. President Donald Trump defended his attorney Rudy Giuliani on Saturday as a “legendary crime buster” and “wonderful lawyer” after a media report that prosecutors are investigating whether the former New York mayor broke lobbying laws in his dealings in Ukraine.

“So now they are after the legendary ‘crime buster’ and greatest Mayor in the history of NYC, Rudy Giuliani,” Trump said in a statement on Twitter.

“He may seem a little rough around the edges sometimes, but he is also a great guy and wonderful lawyer. Such a one sided Witch Hunt going on in USA. Deep State. Shameful!” he tweeted.

The New York Times reported late on Friday that federal prosecutors in Manhattan were investigating Giuliani’s actions regarding Ukraine as part of a case involving two of his business associates, Ukraine-born Lev Parnas and Belarus-born Igor Fruman.

The two men, who helped Giuliani investigate former Democratic Vice President Joe Biden and his businessman son Hunter, were arrested on Thursday over what U.S. prosecutors called a scheme to illegally funnel money to a pro-Trump election committee and other political candidates.

Asked about the Times report, Giuliani told Reuters: “I never did any lobbying for anyone. If they want to ask me I’m happy to prove it. But they haven’t.”

A spokesman for the Manhattan U.S. Attorney’s Office declined to comment.

Trump sowed confusion about his relationship with Giuliani on Friday, responding to a question about whether he was still his personal attorney: “I don’t know.”

Former U.S. Ambassador to Ukraine Marie Yovanovitch told a House of Representatives impeachment inquiry against Trump on Friday that the president ousted her based on “unfounded and false claims” after she came under attack by Giuliani.

The inquiry is focused on a July 25 phone call in which Trump pressed Ukrainian President Volodymyr Zelenskiy to investigate the Bidens. Joe Biden is a leading rival seeking to face Trump in the 2020 presidential election.

Giuliani has accused Yovanovitch of blocking efforts to persuade Ukraine to investigate the Bidens.