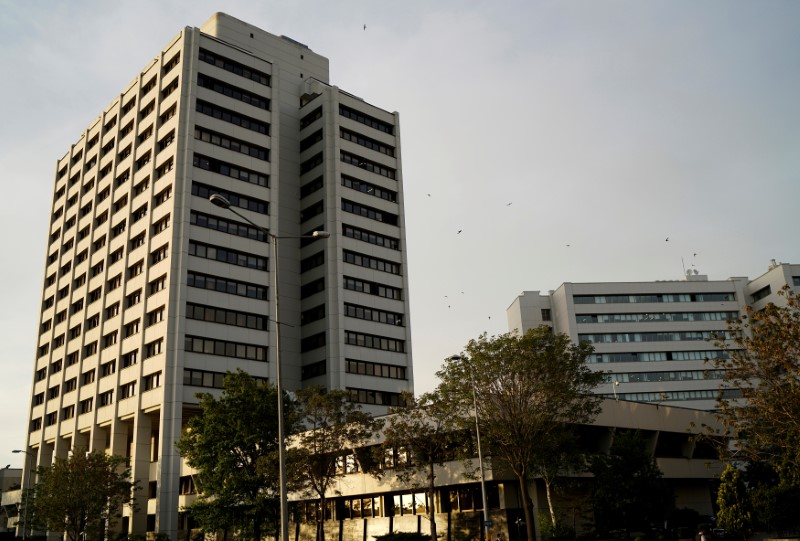 By Nevzat Devranoglu and Ali Kucukgocmen

ISTANBUL (Reuters) – Turkey’s central bank cut its key interest rate by 75 points to 11.25% on Thursday, as expected, its most restrained move since it began easing in July, suggesting any further stimulus would be modest as the economy leaves a recession behind.

But the bank, which lowered its benchmark one-week repo rate

The central bank is likely to “moderate the pace of easing over the coming months, but not … implement an outright pause. In our view, further modest cuts are coming,” said Phoenix Kalen, strategist at Societe Generale (PA:SOGN).

The median forecast in a Reuters poll was for a 50-point cut, with one camp of economists predicting 100 points and another expecting the bank to stand pat, given inflation strength and lira weakness toward the end of 2019.

In a statement, the bank called the cut “measured” and said inflation is headed “broadly in line” with its earlier forecast of 8.2% by year end. “The current monetary policy stance remains consistent with the projected disinflation path,” the bank said.

A separate Reuters poll showed inflation edging down to 9.5% by year end, when the policy rate was seen at 10.25%, based on the median response.

Inflation has dropped from more than 25% after a currency crisis in 2018 that sliced the Turkish lira’s value by nearly 30%. The brief but sharp recession that followed saw economic growth all but disappear in 2019.

The central bank responded to the crisis by raising its policy rate to 24%, where it had stayed until July of last year. Its last cut in December was by 200 basis points, following larger cuts in previous months.

As he aggressively slashed rates in the second half of 2019, Central Bank Governor Murat Uysal said policy was tied to a “reasonable” real rate of return. The real rate remains in positive territory when measured against expected inflation.

Turkish President Tayyip Erdogan, a self-described “enemy” of interest rates, fired Uysal’s predecessor for not following instructions. He says he believes high rates stoke inflation, counter to monetary theory, and has said they will fall in Turkey to single digits in 2020.

The government seeks 5% growth this year, following a recession in which the economy contracted annually in three consecutive quarters to mid-2019.

The central bank “has to tread somewhat carefully from now on given the increase in inflation. But I think the message from the administration has been quite clear, they want single-digit policy rates and they are going to get it,” said Per Hammarlund, chief emerging markets strategist at Swedish bank SEB.

“Quite honestly I think they can get away with it for a while. The lira is still not particularly over-valued,” he added.

Celtic complete the signing of Swiss striker Albian Ajeti for an...