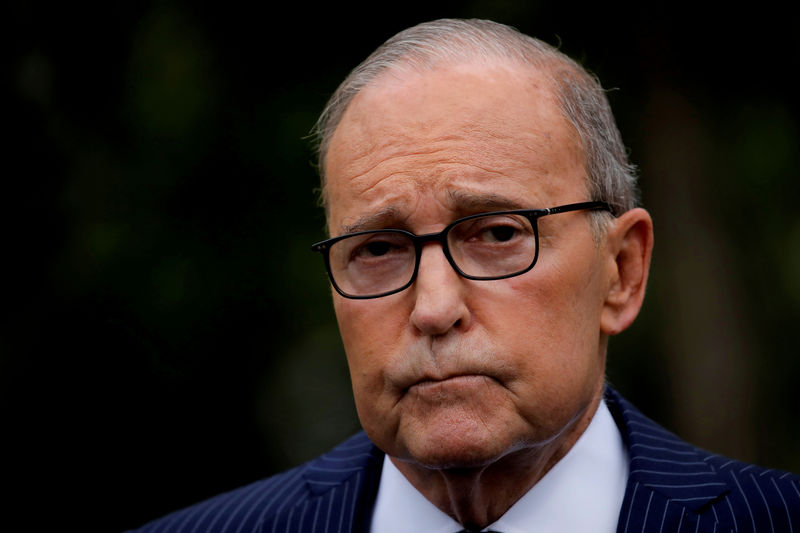 By David Lawder and Makini Brice

WASHINGTON (Reuters) – The Trump administration wants to see “near term results” from U.S.-China trade talks in September and October, White House economic adviser Larry Kudlow said on Friday, but he declined to predict any outcomes or say if U.S. tariff delays were possible.

Speaking on CNBC and Bloomberg TV, Kudlow confirmed that the top U.S. and Chinese trade negotiators would meet in early October but added that a date had not been set.

The plans for the first in-person U.S.-China trade meetings since late July were set during a phone call on Thursday between Chinese Vice Premier Liu He, U.S. Trade Representative Robert Lighthizer and Treasury Secretary Steven Mnuchin. Trade deputies are due to meet in mid-September.

The 14-month U.S.-China trade war has escalated sharply since May, when talks broke down after Beijing backtracked on earlier commitments to make changes in law to improve intellectual property protections, curb the forced transfer of U.S. technology to Chinese firms and improve U.S. access to Chinese markets.

Since then, U.S. President Donald Trump has sharply increased existing tariffs on $200 billion worth of Chinese goods and imposed or scheduled new tariffs on virtually all remaining imports from China to increase his negotiating leverage.

Kudlow told Bloomberg TV that he could not speculate on whether the September or October talks could delay a planned tariff increase on Oct. 1 to 30% from 25% on $250 billion worth of Chinese goods.

“Our team would like to go back and pick up where we left off in the May talks. Whether that will be possible remains to be seen,” Kudlow said.

He said Trump has shown willingness to use tariffs as part of the negotiating process.

“We want to see results. We would like to see results in the near term. When we don’t see results, we take additional actions,” Kudlow said. “On the other hand, if we do see results from these upcoming meetings, then progress will be made.”

Kudlow also said there were no preconditions for the October talks.

Trump later said on Twitter that China was hurting economically from the U.S. tariffs but that the new round of talks were positive.

Iran has capacity to enrich uranium at any percentage: nuclear agency

'This is the home of football': Government committed to supporting a...