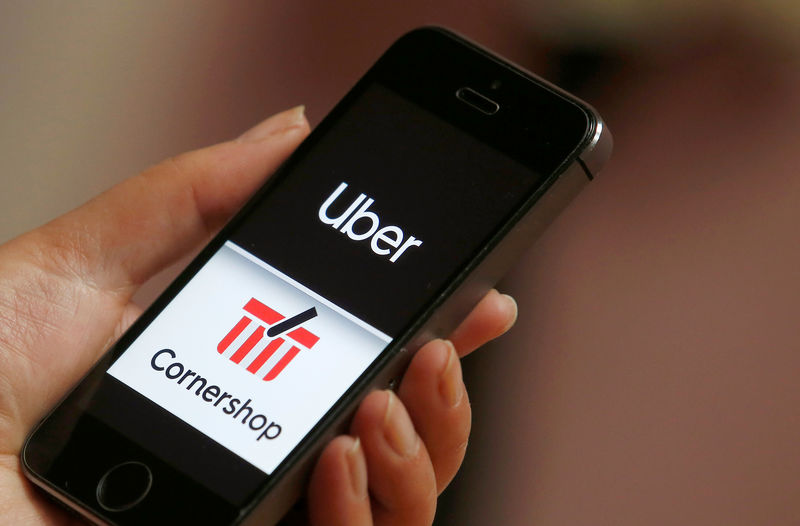 © Reuters. The logo of the Chilean online grocery provider Cornershop next to the logo of Uber application are seen on a mobile phone in this picture illustration taken at Vina del Mar

By Dave Sherwood and Aislinn Laing

SANTIAGO (Reuters) – Uber (N:UBER) said on Friday it would buy a majority stake in online grocery provider Cornershop as the ride-hailing giant moves to expand its fast-growing delivery service into the grocery store market.

Santiago-based Cornershop operates in Mexico, Chile, Canada and Peru, but Chief Executive Oskar Hjertonsson said the deal would allow it to deliver groceries “in many more countries around the world.”

He retweeted the news of the deal as it broke, adding: “This will be fun!”

The app provides delivery of “groceries to your front door in one hour” from retailers including Costco Wholesale Corp (O:COST), Walmart Inc (N:WMT) and Mexico’s Chedraui (MX:CHDRAUIB). It charges retail chains and customers a commission for its services.

“Whether it’s getting a ride, ordering food from your favorite restaurant, or soon, getting groceries delivered, we want Uber to be the operating system for your everyday life,” Uber CEO Dara Khosrowshahi said in a statement.

No valuation was disclosed for the deal. Uber said it expected to close the deal in early 2020, “subject to regulatory approval.”

Cornershop would continue to operate under its current leadership, which would report to a board with majority Uber representation, Uber said in a statement.

Cornershop has rapidly gained popularity in local markets, including Chile, where its shoppers are a common sight scrambling down the aisles of grocery stores as they hunt down orders for customers.

The news of the deal comes amid a flurry of similar announcements from Uber, as it seeks to expand beyond its core taxi app.

This week it launched a boat service in Nigeria’s populous Lagos, expanded a helicopter taxi service in New York’s JFK airport and began an app in Chicago to connect workers with businesses needing to fill available shifts.

The move to diversify comes at a time when Uber’s main ride hailing operations face competition in Asia, while the U.S. company is also facing regulatory scrutiny for classifying its drivers as independent contractors.

Plastic waste soared during lockdown as British households generated 25 per...

UK's first commercial rocket 'will lift off from Shetland spaceport in...