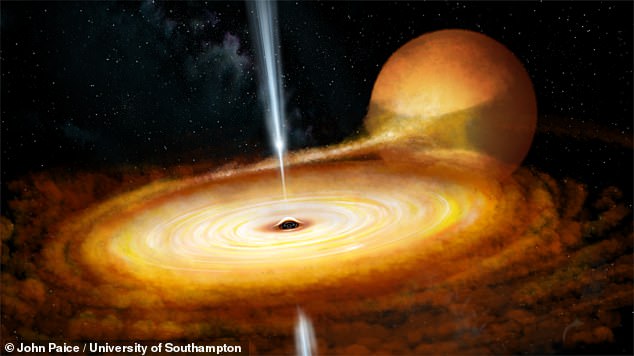 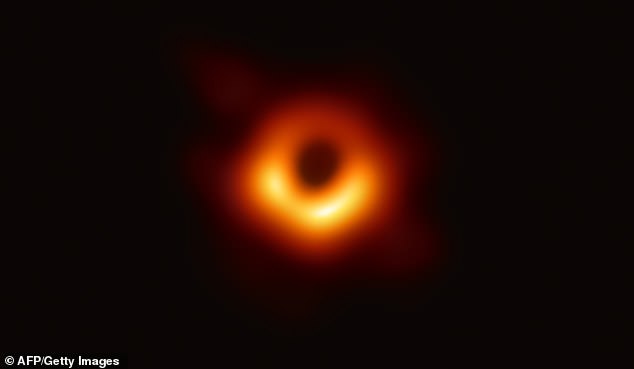 Astronomers this year achieved what was thought to be impossible and captured the first ever real photograph of a black hole. The now-famous picture depicts a supermassive black hole at the centre of the galaxy Messier 87, 54million light years away from Earth. The image shows a bright ring formed as light bends in the intense gravity around a black hole that is 6.5billion times more massive than the Sun 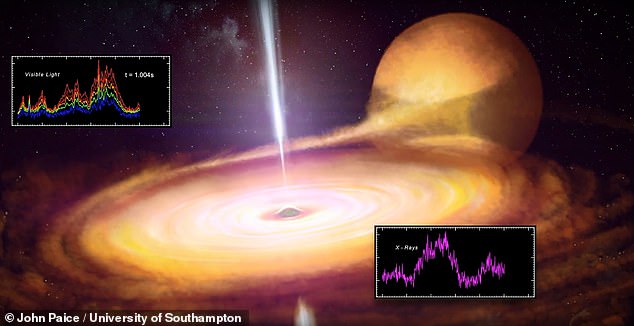 Astronomers have created footage of a violent flaring phenomenon at the centre of a black hole in our solar system.

Scientists from the University of Southampton used state-of-the-art cameras to capture the dramatic event in more detail than ever before.

And using the data from these observations they have created a slowed down and illustrated animation of what the process could look like.

The 40-second clip depicts the black hole – which is 10,000 light years away, within our own Milky Way – shooting out giant beams of radiation as its immense gravitational pull and magnetic fields interact with matter it’s sucking in.

These huge explosions can spit out considerably more energy than our Sun in the blink of an eye.

Graduate student John Paice, who created the movie, said: ‘The movie was made using real data, but slowed down to 1/10th of actual speed to allow the most rapid flares to be discerned by the human eye.

‘We can see how the material around the black hole is so bright, it’s outshining the star that it is consuming.

‘And the fastest flickers last only a few milliseconds – that’s the output of a hundred Suns and more being emitted in the blink of an eye.’

This black hole system weighs about seven times as much as our Sun but that’s compressed into an area smaller than the City of London.

The team combined their observations from a telescope in the Canary Islands with X-rays from an NASA observatory on the International Space Station.

Flares like these are hard to observe, the researchers said, because they’re so far away, so faint and happen so quickly.

And although this isn’t the first time they’ve been found, it’s a far more detailed and accessible version of it than has been produced in the past.

‘The fact that we now see this in three systems strengthens the idea that it is a unifying characteristic of such growing black holes,’ Mr Paice said.

‘If true, this must be telling us something fundamental about how plasma flows around black holes operate.

‘Our best ideas invoke a deep connection between inspiralling and outflowing bits of the plasma.

‘But these are extreme physical conditions that we cannot replicate in Earth laboratories, and we don’t understand how nature manages this. Such data will be crucial for homing in on the correct theory.’

The team published their findings in the Monthly Notices of the Royal Astronomical Society: Letters.

Black holes are so dense and their gravitational pull is so strong that no form of radiation can escape them – not even light.

They act as intense sources of gravity which hoover up dust and gas around them. Their intense gravitational pull is thought to be what stars in galaxies orbit around.

How they are formed is still poorly understood. Astronomers believe they may form when a large cloud of gas up to 100,000 times bigger than the sun, collapses into a black hole.

Many of these black hole seeds then merge to form much larger supermassive black holes, which are found at the centre of every known massive galaxy.

Alternatively, a supermassive black hole seed could come from a giant star, about 100 times the sun’s mass, that ultimately forms into a black hole after it runs out of fuel and collapses.

When these giant stars die, they also go ‘supernova’, a huge explosion that expels the matter from the outer layers of the star into deep space.

FC Dallas forced to pull out of MLS is Back tournament...

Everton confirm 'no permanent damage' has been done to statue of...