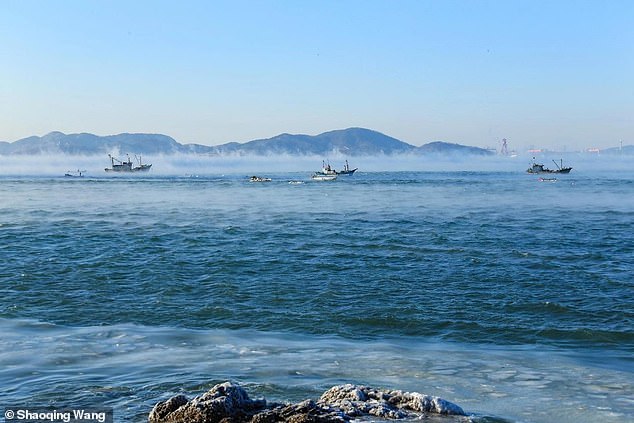 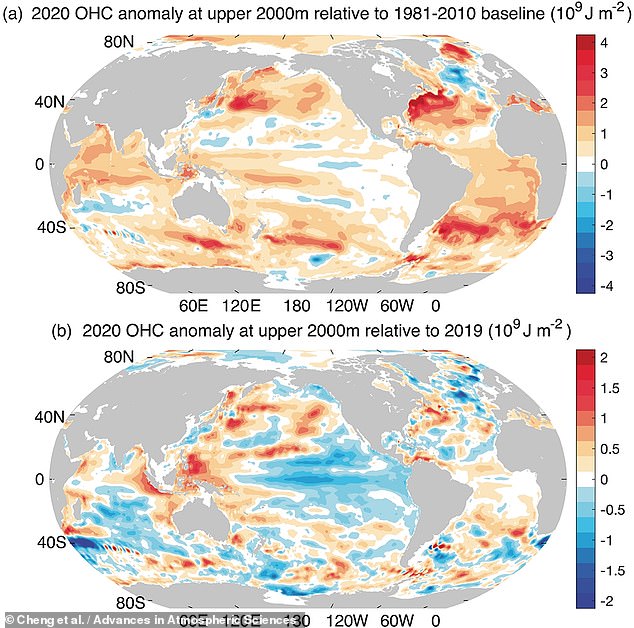 Chinese experts said that a ‘severe risk’ is posed to humanity by the rising temperatures , which continue despite the COVID-related dip in emissions last year. Pictured, the difference in ‘ocean heat content’ between 2020 and the 1981–2010 baseline (top) and 2019 (bottom) 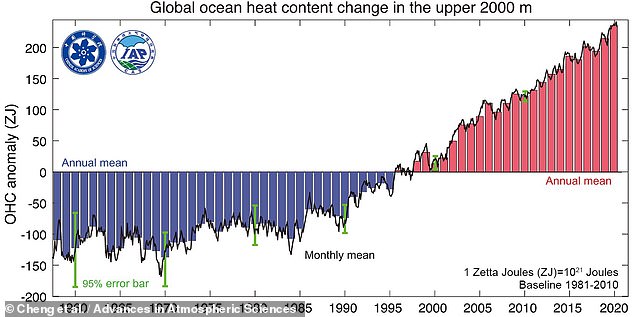 The ocean acts as a buffer to global warming, soaking up more than 90 per cent of the extra heat generated by the phenomenon. Pictured, the changing global ocean heat content from 1960–2020, as expressed relative to the the 1981–2010 baseline 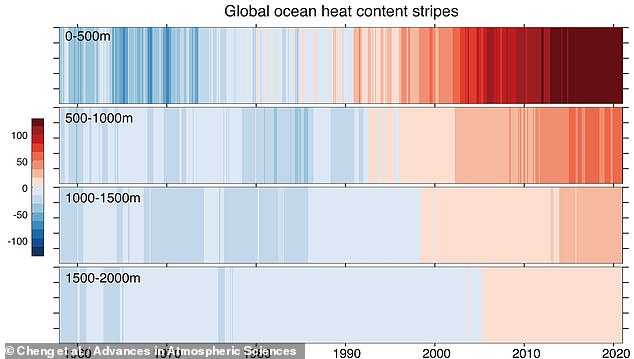 In the new study, researchers noted the highest ocean temperatures recorded in 65 years as taken from surface level down to a depth of 1.24 miles (2 kilometres). Pictured, the changing global ocean heat content for different upper ocean layers from 1960–2020, as expressed relative to the the 1981–2010 baseline

Unusually warm periods can last for weeks or months, killing off kelp forests and corals, and producing other significant impacts on marine ecosystems, fishing and aquaculture industries worldwide (pictured)

This graph shows a yearly count of marine heatwave days from 1900 to 2016, as a global average.

Enough extra heat was absorbed by the world’s seas last year to boil some 1.3 billion kettles, continuing a trend of increasing ocean temperatures, a study has found.

Researchers from China said that a ‘severe risk’ is posed to humanity by the rising temperatures, which continue despite the COVID-related dip in emissions last year.

The ocean, they explained, acts as a buffer to global warming, soaking up more than 90 per cent of the extra heat generated by the phenomenon.

However, the effects of ocean warming will bring more natural catastrophes — such as the wildfires that raged in Australia and the Amazon in 2020, the team warned.

In the new study, researchers noted the highest ocean temperatures recorded in 65 years as taken from surface level down to a depth of 1.24 miles (2 kilometres).

The team have urged policymakers to consider the lasting damage that warmer oceans can cause as we try to reduce the impacts of climate change.

‘Why is the ocean not boiling? Because the ocean is vast,’ said paper author and climate scientist Lijing Cheng of the Chinese Academy of Sciences in Beijing.

‘We can imagine how much energy the ocean can absorb and contain and when it’s released slowly, how big the impact is.’

‘Warmer oceans and a warmer atmosphere also promote more intense rainfalls in all storms, and especially hurricanes, increasing the risk of flooding,’ Professor Cheng said, noting the wildfires that struck Australia, the US and the Amazon last year.

‘Extreme fires like those witnessed in 2020 will become even more common in the future. Warmer oceans also make storms more powerful, particularly typhoons and hurricanes,’ he continued.

Professor Cheng and colleagues determined that the upper 1.24 miles (2 kilometres) of the world’s oceans absorbed 20 more Zettajoules than they did in 2019.

Experts have warned that we must act now — as the ocean’s delayed response to global warming means changes will last for several decades.

‘Over 90 per cent of the excess heat due to global warming is absorbed by the oceans, so ocean warming is a direct indicator of global warming,’ explained Professor Cheng, who is affiliated with the Center for Ocean Mega-Science.

‘The warming we have measured paints a picture of long-term global warming.’

‘However, due to the ocean’s delayed response to global warming, the trends of ocean change will persist at least for several decades.’

‘So societies need to adapt to the now unavoidable consequences of our unabated warming.’

‘But there is still time to take action and reduce our emissions of greenhouse gases.’

Alongside analysing ocean temperatures, the the researchers also examined ocean salinity measurements taken down to a depth of 1.24 miles (2 kilometres), as recorded in the so-called World Ocean Database.

They found that the upper layers of the oceans are warming faster than their deeper counterparts — with knock-on effects that could damage marine ecosystems.

‘The fresh gets fresher, the salty gets saltier,’ said Professor Cheng.

‘However the associated ocean changes also pose a severe risk to human and natural systems.’

With their initial study complete, the team will continue to monitor ocean temperatures and the impacts warming has on other oceanic characteristics, such as salinity and stratification.

‘As more countries pledge to achieve “carbon neutrality” or “zero carbon” in the coming decades, special attention should be paid to the ocean,’ Professor Cheng suggested.

‘Any activities or agreements to address global warming must be coupled with the understanding that the ocean has already absorbed an immense amount of heat.’

The world’s seas, he added, ‘will continue to absorb excess energy in the Earth’s system until atmospheric carbon levels are significantly lowered.’

The full findings of the study were published in the journal Advances in Atmospheric Sciences.

On land, heatwaves can be deadly for humans and wildlife and can devastate crops and forests.

Unusually warm periods can also occur in the ocean. These can last for weeks or months, killing off kelp forests and corals, and producing other significant impacts on marine ecosystems, fishing and aquaculture industries.

Yet until recently, the formation, distribution and frequency of marine heatwaves had received little research attention.

Climate change is warming ocean waters and causing shifts in the distribution and abundance of seaweeds, corals, fish and other marine species. For example, tropical fish species are now commonly found in Sydney Harbour.

But these changes in ocean temperatures are not steady or even, and scientists have lacked the tools to define, synthesize and understand the global patterns of marine heatwaves and their biological impacts.

At a meeting in early 2015, we convened a group of scientists with expertise in atmospheric climatology, oceanography and ecology to form a marine heatwaves working group to develop a definition for the phenomenon: A prolonged period of unusually warm water at a particular location for that time of the year. Importantly, marine heatwaves can occur at any time of the year, summer or winter.

With the definition in hand, we were finally able to analyse historical data to determine patterns in their occurrence.

Over the past century, marine heatwaves have become longer and more frequent around the world. The number of marine heatwave days increased by 54 per cent from 1925 to 2016, with an accelerating trend since 1982.

We collated more than 100 years of sea surface temperature data around the world from ship-based measurements, shore station records and satellite observations, and looked for changes in how often marine heatwaves occurred and how long they lasted.

These long-term trends can be explained by ongoing increases in ocean temperatures. Given the likelihood of continued ocean surface warming throughout the 21st century, we can expect to see more marine heatwaves globally in the future, with implications for marine biodiversity.

Numbers and statistics are informative, but here’s what that means underwater.

A number of recent marine heatwaves have done just that.

In 2011, a marine heatwave off western Australia killed off a kelp forest and replaced it with turf seaweed. The ecosystem shift remained even after water temperatures returned to normal, signalling a long-lasting or maybe even permanent change.

That same event led to widespread loss of seagrass meadows from the iconic Shark Bay area, with consequences for biodiversity including increased bacterial blooms, declines in blue crabs, scallops and the health of green turtles, and reductions in the long-term carbon storage of these important habitats.

Similarly, a marine heatwave in the Gulf of Maine disrupted the lucrative lobster fishery in 2012. The warm water in late spring allowed lobsters to move inshore earlier in the year than usual, which led to early landings, and an unexpected and significant price drop.

More recently, a persistent area of warm water in the North Pacific, nicknamed ‘The Blob’, stayed put for years (2014-2016), and caused fishery closures, mass strandings of marine mammals and harmful algal bloom outbreaks along the coast. It even changed large-scale weather patterns in the Pacific Northwest.

As global ocean temperatures continue to rise and marine heatwaves become more widespread, the marine ecosystems many rely upon for food, livelihoods and recreation will become increasingly less stable and predictable.

Anthropogenic, that is human-caused, climate change is linked to some of these recent marine heatwaves.

For example, human emissions of greenhouse gases made the 2016 marine heatwave in tropical Australia, which led to massive bleaching of the Great Barrier Reef, 53 times more likely to occur.

Even more dramatically, the 2015-16 marine heatwave in the Tasman Sea that persisted for more than eight months and disrupted Tasmanian fisheries and aquaculture industries was over 300 times more likely, thanks to anthropogenic climate change.

For scientists, the next step is to quantify future changes under different warming scenarios. How much more often will they occur? How much warmer will they be? And how much longer will they last?

Ultimately, scientists should develop forecasts for policy makers, managers and industry that could predict the future impacts of marine heatwaves for weeks or months ahead. Having that information would help fishery managers know when to open or close a fishery, aquaculture businesses to plan harvest dates and conservation managers to implement additional monitoring efforts.

Forecasts can help manage the risks, but in the end, we still need urgent action to curb greenhouse gas emissions and limit global warming. If not, marine ecosystems are set for an ever-increasing hammering from extreme ocean heat.

Georginio Wijnaldum 'will REJECT a new Liverpool contract in order to...