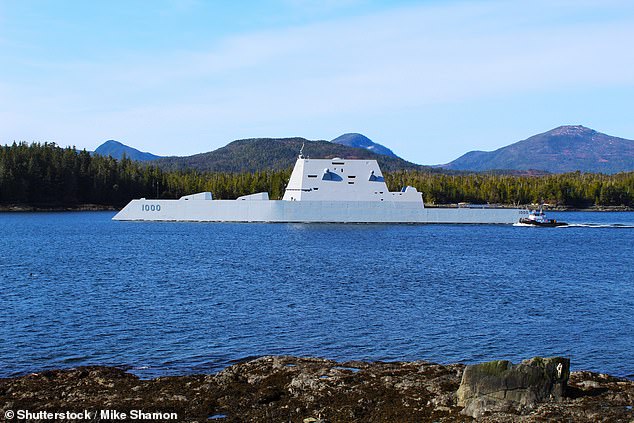 The Conventional Prompt Strike system, which has not been field tested, has been engineered to hit anywhere within an hour and could be loaded on the USS Zumwalt. Stock image 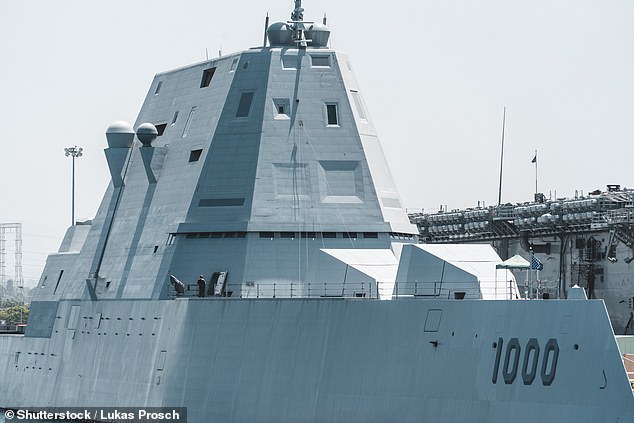 The Zumwalt is a new class of guided missile destroyer and her captain, Kevin Smith, told Fox News she would be the perfect platform for the upcoming weapon system. Stock image

A new type of weapon capable of making a ‘rapid hit’ on an enemy from anywhere in the world could be loaded on to a US Navy stealth destroyer.

The Conventional Prompt Strike system (CPS), which has not yet been field tested, is designed to hit anywhere within an hour and could be loaded onto the USS Zumwalt.

The Zumwalt is a new class of guided missile destroyer and her captain, Kevin Smith, told Fox News she would be the perfect platform for the upcoming weapon system.

The missile is able to fly five times the speed of sound by using rocket boosters to get into space and then ‘leaping’ over the upper atmosphere to fix on its target.

The missiles will carry conventional warheads and will have the same speed and range as a nuclear ICBM, Fox News reports.

The idea is to enable ‘fast attacks’ against enemy targets from a safe distance at the start of a conflict, according to reports on the weapon platform.

The next test flight of the CPS missile is not due until later this year, with further testing in 2022 and no fixed date on when it will be ready for combat.

It uses a booster rocket to get to hypersonic speed, but then ejects the booster as it enters the upper atmosphere, according to Lockhead Martin, which has a multi-million dollar contract with the Navy to build the weapons.

Being able to ‘leap’ between the upper atmosphere and space makes it very difficult to detect and each leap helps determine the final impact point.

Fox News reports that this would allow for rapid attacks on an enemy target without having to wait to deploy soldiers and other assets.

The idea of a Conventional Prompt Strike weapon first emerged when George W Bush was president, with the goal of providing a ‘tactical surprise’ when conflict starts.

Being able to fire it from a destroyer would be more strategic than firing from land, according, according to the Zumwalt’s captain.

Arming a ship with the new weapon aligns with plans to create a ‘premier strike platform in the surface fleet’, according to Vice Admiral Rich Brown, Commander of Naval Surface Forces.

The ‘stealthy characteristics’ of the Zumwalt and the fact it can operate in the deep ocean also play a part in making it the best choice to host the Conventional Prompt Strike platform, Captain Smith told Fox News.

‘The inherent capability of this ship is signatures. It is designed to be stealthy and carry the fight offensively to the adversary,’ said Captain Smith.

The new weapon is not currently ready for deployment and there have been issues throughout its long development process.

This means that it is only being ‘considered’ as an option for the Zumwalt, which is expected to be battle ready by 2021.

However, there has been some opposition to developing a missile that can travel at the same speed, range and trajectory as a nuclear armed warhead.

People opposed to the project say this could lead to confusion over the exact nature of the attack and prompt a nuclear response.

Developers say the signature of any attack with CPS would be different to a nuclear attack, and that the weapon is intended to ‘supplement US conventional capabilities’ rather than act as a nuclear substitute.

The Zumwalt is the first in a class of three new stealth destroyers. The other two are called the Michael Monsoor and the Lyndon B. Johnson.

The ships with an unusual, stealthy shape are the largest and costliest destroyers built for the Navy, weighing in at 15,000 tons.

They feature an unconventional wave-piercing hull and a sleek deckhouse that hides radar and other sensors inside.

Heavy automation allowed the Navy to reduce the crew size by half, compared with the other destroyers in the fleet.

An intercontinental ballistic missile (ICBM) is a long-range weapon used to deliver warheads to distant targets.

It is a type of ballistic missile, which are powered and guided toward a target but fall onto to it under gravity.

This means the trajectory of the missiles is a high, arching path.

To be classed as an ICBM, a missile must carry a warhead more than 3,400 miles (5,400km) either through the air, or through space.

Those that travel through space – which includes almost all nuclear missiles – are painstakingly designed to survive the heat and pressure of re-entry.