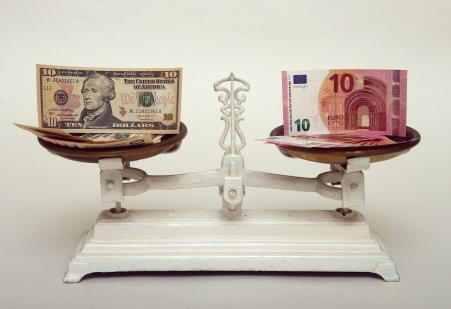 The euro is approaching parity with the U.S. dollar, something the world hasn’t seen since 2002. The eurozone’s official currency has tumbled 12 percent since the start of 2015, hitting a 12-year low of $1.0495 against the greenback Thursday.

Here are the four main factors driving the euro’s steep decline this week:

The European Central Bank launched its massive quantitative easing program Monday. The effort will pump 1 trillion euros ($1.1 trillion) into Europe’s economy. That means 60 billion euros ($66.3 billion) will be injected each month over the next 18 months in an effort to restore the inflation rate back to targeted level of 2 percent and help boost economic growth in the troubled region. The ECB expects the bond-buying program to end in September 2016.

QE will continue to have a significant effect on the euro as the ECB pumps more money into its economy. By increasing the money supply, the ECB will weaken the euro against other major currencies. That will then help boost Europe’s exports and inflation. A cheaper euro can boost its economy by making it easier for it to sell goods to other countries.

The ECB’s QE program includes buying government bonds in order to push down their yields. With interest rates at record lows, investors are looking to move cash overseas into places such as the U.S., where they are likely to get a better return. As money flows out of Europe, the euro is depreciating.

The divergence of global central bank monetary policies is also hurting the euro. At the same time that the ECB is taking steps that weaken the euro, the U.S. Federal Reserve is adhering to policies that boost the dollar. The Fed is considering tightening its monetary policy by raising interest rates in 2015. Speculation over the timing of the Fed’s action is adding to the volatility in the euro this week as the U.S. dollar continues to surge on the prospect of higher rates.

There was a similar depreciation in the U.S. dollar when the Fed started the quantitative easing or QE program following the financial crisis. During the first year of the Fed’s 17-month initial round of QE, which began in November 2008, the dollar declined 16 percent against the euro. The greenback remained weak up until the Fed’s asset-purchasing program ended in October. Since the Fed ended QE, the U.S. dollar has gained 20 percent against the euro.

A third factor economists attribute the euro’s decline is Europe’s record low interest rates. The ECB cut rates to an historic low of 0.05 percent in September as a way to fight the eurozone’s creeping deflation.

One of the main goals of the ECB’s policy is to encourage eurozone banks and lenders to make more funds available to business and household borrowers at lower interest rates, aiming to boost private spending by lifting investment and consumption. But because the ECB policy reduces eurozone interest rates compared with interest rates in the U.S., it also increases the relative attractiveness of holding higher interest dollar-denominated debt as opposed to lower interest euro-denominated debt, says Gary Burtless, senior fellow and labor economist for the Brookings Institution.

This helps achieve a second goal of the ECB policy, which is to boost the demand for goods and services produced in the eurozone. The lower value of the euro helps European exporters become more competitive by making goods less expensive for overseas customers.

Eurozone finance ministers granted Athens a four month extension to the country’s bailout program last month amid the country’s ongoing debt negotiations. But as Greece creeps back into the headlines, reigniting concerns about the country’s possible exit from the eurozone, it adds more downward pressure on the euro.

Citigroup closes some branches, mostly in LA and Chicago, due to...