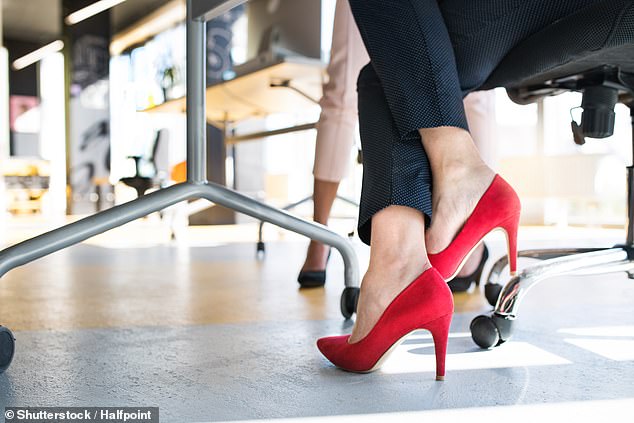 Scientists quizzed 292 female university students, who were all straight, about how often they wear stilettos or other types of the shoe

Women are less likely to don high heels if they are going on a date with a man they think is ugly, a controversial study has found.

Scientists quizzed 292 female university students, who were all straight, about how often they wear stilettos or other types of the shoe.

The volunteers were asked if they would wear high heels or a flat sole shoe if they went on a date with two men plucked from Google Images.

One of them was considered to be very attractive by a panel of 14 separate women, the other was deemed to be the polar opposite.

Sixty per cent said they would opt for high heels on a date with an attractive male, according to the scientists based in Slovakia.

In comparison, only 22 per cent of the same women revealed they would wear the same shoes for a date with the unattractive male.

Similar results were recorded when the team from Comenius University in Bratislava removed answers from women who had never wore high heels.

Writing in a scientific journal, the team said: ‘From an evolutionary view, high heels serve as a subtle and strategic indicator of female sexual interest.

‘On the other hand, females might avoid high heels in situation in which they wish to avoid unwanted mating attention.’

The researchers, led by Dr Pavol Prokop, added: ‘Females use various behavioural tactics in order to attract the attention of a desirable mate.

‘Wearing high heels enhances female physical attractiveness for the opposite sex, thus their use seems to be a powerful sexual signal.

‘[Heels] improve the lumbal curvature and alters the female’s gait, reduces stride length and increases rotation and tilt of the hips.’

‘In reality, they wouldn’t have been going on a date with the “polar opposite of attractive” imaginary man.

‘In a sense, these women were hypothetically being “forced” to go on dates with a man they did not want to go on a date with.’

Men find high heels attractive because they make a woman arch her back – which is a signal that she is ready for sex, a study suggested last January.

The theory was tested by showing men photographs of women wearing heels or flats, but with the picture cropped at their ankles.

The closer their back arched to an optimum angle of 45 degrees, the more likely men were to find them attractive.

The authors at Murdoch University in Australia said this arched back in high heels may communicate information about a woman’s ‘openness to mating advances’.

In many animals, arching of the lower back is a signal of sexual proceptivity – the tendency to engage in behaviour which instigates or ‘promotes’ sex.

She added: ‘High heels do tend to imply having made an effort, which is why they are often part of professional or formal attire.

‘But it’s wrong to say that “high heels are sexual symbols” in this context, even if some people find them appealing in that way.

‘It’s important to stress that high heels or any kind of clothing or makeup does not automatically signal interest or consent.

‘Maybe she wears sneakers because she’s really into her date and hopes they can take a long walk after dinner.

‘Or she’s worried heels would make her seem “high maintenance” and she wants to be seen as fun and cool.

‘It’s such an individual choice that would vary based on age, individual style, country, city, and of course the venue of the date.’

The study, published in Personality and Individual Differences, excluded 29 women who weren’t straight or were under 18.

The remaining volunteers had an average age of 21. Most of them (45 per cent) reported wearing 11cm high heels around once a month.

One of the participants told the researchers she wore heels approximately 25 times per month through an online questionnaire.

They were all also asked to rate how attractive they find themselves, on a scale of one (very unattractive) to seven (very attractive).

Women who ranked themselves as being more attractive – and those who claimed to be smaller – were more likely to wear heels, results showed.

The experts speculated that more attractive females may be ‘more resistant to potentially negative bodily outcomes from wearing high heels’.

For the ‘mating’ part of the study, 14 women were asked to rate the attractiveness of two different men on the same seven-point scale.

One of the men scored 6.1 on average, the other was given a 1.6. Both of the pictures came from Google.

Participants were then asked: ‘Imagine that the male in the picture invited you on a date. Which of the two shoes would you prefer for this date?’

They were given either a picture of a model wearing black flat sole shoes or white 11cm heels ‘to increase the visibility of the shoes’.

However, Mrs Brennan said: ‘It would be a cleaner theory if the shoes had been the same color rather than black versus white.’