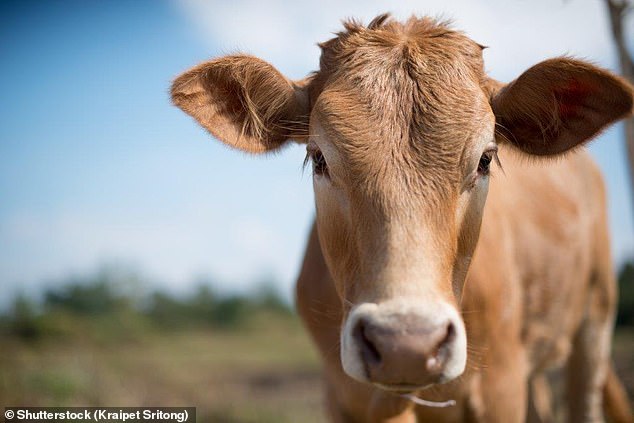 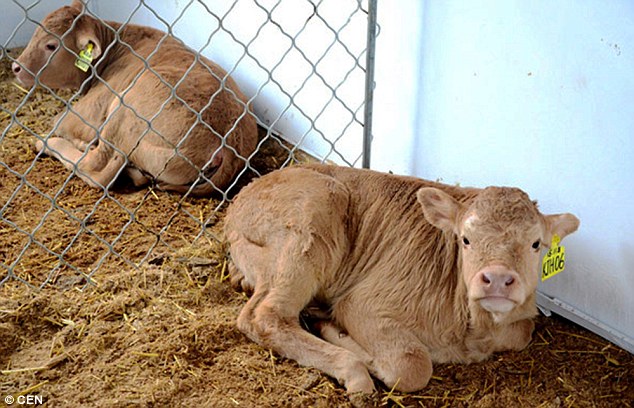 Many cows have been cloned since Kaga and Noto became the first in the late 1990s – pictured, two of a group of six French Blonde d’Aquitanes which were cloned using the DNA from a portion of their father’s ear in China in 2015

To create somatic cell nuclear transfer (SCNT) clones, scientists take DNA (red circle) from tissue and insert it into egg cells (yellow) with their DNA (green) removed. The scientists then switch on or off certain genes to help the cells replicate (right)

The world’s first cloned cow has died of old age at 21 at the research centre in Japan where it lived.

Kaga died on Wednesday after living a healthy life and outliving her twin sister Noto, who died May last year when she was found unconscious in a barn.

The average lifespan for a cow is 20 years and, marking a scientific breakthrough, neither of the creatures suffered serious health problems as a result of their creation.

Born in July 1998, Kaga and Noto followed the world’s first successfully cloned animal, Dolly the sheep – who was born in 1996 and died in 2003.

The twins both successfully birthed healthy calves in 2000, as the first cloned cows to have calves.

Kaga and her twin, Noto were produced using a somatic cell nuclear transfer technique, in which genetic information of an unfertilised egg donor is replaced with DNA from an adult body cell.

For a month before her death Kaga had been suffering health problems and was struggling to stand up, she had been given an anti-inflammatory drip to her legs.

Living at the Ishikawa research centre the cows were the first of 14 cows to be cloned in the Japanese lab before 2009 when cloned beef was restricted for sale.

Kaga and Noto were spared slaughter as the scientists wished to study how long they would live naturally.

The clones were carried out by Ishikawa research centre as a joint research study with Kindai University, Higashi-osaka, Japan.

Twins Kaga and Noto were one of eight embryos, the only two to survive, cloned from the same cow – whose DNA was taken at a slaughter house.

Cloning describes several different processes that can be used to produce genetically identical copies of a plant or animal.

In its most basic form, cloning works by taking an organism’s DNA and copying it to another place.

This takes a somatic cell, such as a skin cell, and moves its DNA to an egg cell with its nucleus removed.

iPSCs are skin or blood cells that have been reprogrammed back into an embryonic-like state.

This allows scientists to design them into any type of cell needed.

Could we ever clone a human?

Currently there is no scientific evidence that human embryos can be cloned.

In 1998, South Korean scientists claimed to have successfully cloned a human embryo, but said the experiment was interrupted when the clone was just a group of four cells.

In 2002, Clonaid, part of a religious group that believes humans were created by extraterrestrials, held a news conference to announce the birth of what it claimed to be the first cloned human, a girl named Eve.

This was widely dismissed as a publicity stunt.

In 2004, a group led by Woo-Suk Hwang of Seoul National University in South Korea published a paper in the journal Science in which it claimed to have created a cloned human embryo in a test tube.

According to the National Human Genome Research Institute, from a technical perspective cloning humans is extremley difficult.

‘One reason is that two proteins essential to cell division, known as spindle proteins, are located very close to the chromosomes in primate eggs,’ it writes.

‘Consequently, removal of the egg’s nucleus to make room for the donor nucleus also removes the spindle proteins, interfering with cell division.’

The group explains that in other mammals, such as cats, rabbits and mice, the two spindle proteins are spread throughout the egg.