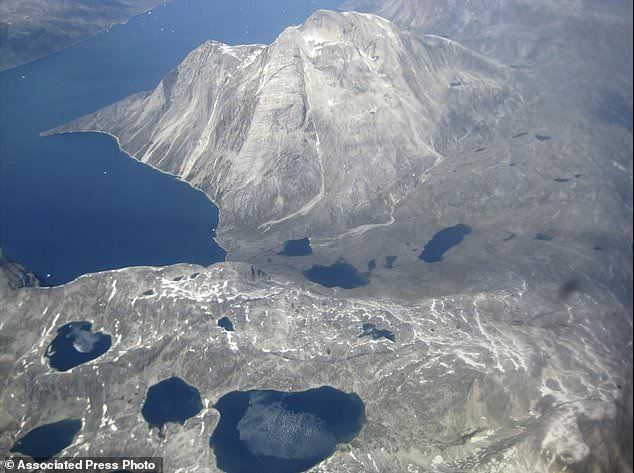 Dramatic change: An aerial view of melted ice lakes on the edge of Nunatarssuk, Greenland, where huge amounts of ice has been lost to the hot weather 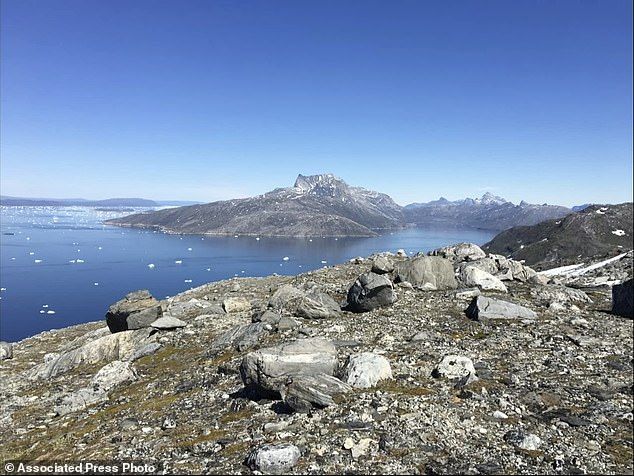 Small pieces of ice float in the water in Nuuk Fjord: In Greenland, the melt area this year is the second-biggest in terms of ice area affected, behind more than 90 per cent in 2012 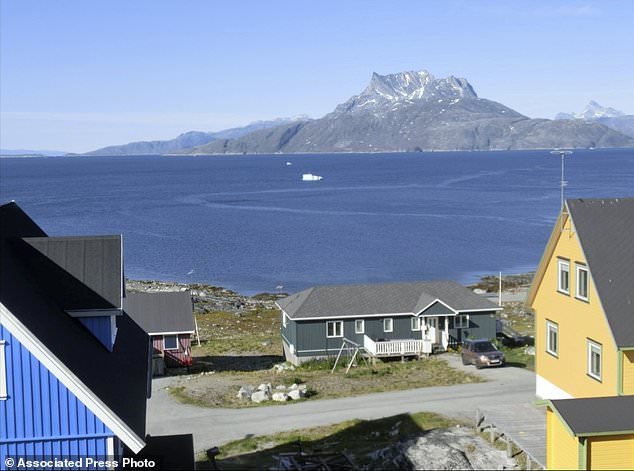 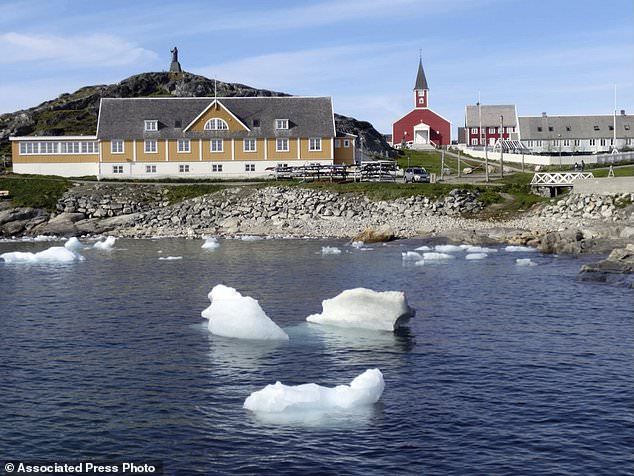 In this image taken on June 13, 2019 small pieces of ice float in the water off the shore in Nuuk, Greenland. Milder weather than normal since the start of summer in Greenland, led to the UN’s weather agency voicing concern that the hot air which produced the recent extreme heat wave in Europe could be headed toward Greenland where it could contribute to increased melting of ice. (AP Photo/Keith Virgo)

The heat wave that smashed high temperature records in five European countries a week ago is now over Greenland, accelerating the melting of the island’s ice sheet and causing massive ice loss in the Arctic.

Greenland, the world’s largest island, is a semi-autonomous Danish territory between the Atlantic and Arctic oceans that has 82 per cent of its surface covered in ice.

The area of the Greenland ice sheet that is showing indications of melt has been growing daily, and hit a record 56.5 per cent for this year on Wednesday, said Ruth Mottram, a climate scientist with the Danish Meteorological Institute.

More than 10 billion tons of ice was lost to the oceans by surface melt on Wednesday alone, creating a net mass ice loss of some 197 billion tons from Greenland in July, she said.

‘It looks like the peak will be today. But the long-term forecast is for continuing warm and sunny weather in Greenland, so that means the amount of the ice loss will continue,’ she said Thursday in a telephone interview from Copenhagen.

The scope of Wednesday’s ice melt is a number difficult to grasp. To understand just how much ice is being lost, a mere 1 billion tons – or 1 gigaton – of ice loss is equivalent to about 400,000 Olympic-sized swimming pools, the Danish Meteorological Institute said . And 100 billion tons (110 billion U.S. tons) corresponds to a 0.28 mm (0.01 inch) rise in global sea levels.

Mottram said since June 1 – roughly the start of the ice-loss season – the Greenland ice sheet has lost 240 gigatons (240 billion metric tons) this year. That compares with 290 gigatons lost overall in the 2012 melt season, which usually goes through the end of August.

A June 2019 study by scientists in the U.S. and Denmark said melting ice in Greenland alone will add between 5 and 33 centimeters (2 to 13 inches) to rising global sea levels by the year 2100. If all the ice in Greenland melted – which would take centuries – the world’s oceans would rise by 7.2 meters (23 feet, 7 inches), the study found.

The current melting has been brought on by the arrival of the same warm air from North Africa and Spain that melted European cities and towns last week, setting national temperature records in Belgium, Germany, Luxembourg, the Netherlands and Britain.

In Russia, meanwhile, forest fires caused by hot, dry weather and spread by high winds are raging over nearly 30,000 square kilometers (11,580 sq. miles) of territory in Siberia and the Russian Far East, an area the size of Belgium.

The smoke from these fires, some of them in Arctic territory, is so heavy it can easily be seen in satellite photos and is causing air quality problems in Russia’s third-largest city, Novosibirsk. Protesters in Moscow on Thursday were demanding that the government do more to fight the blazes. Greenland has also been battling a slew of Arctic wildfires, something that Mottram said was uncommon in the past.

In Greenland, the melt area this year is the second-biggest in terms of ice area affected, behind more than 90 per cent in 2012, said Mark Serreze, director of the Snow and Ice Data Center in Boulder, Colorado, which monitors ice sheets globally. Records go back to 1981.

A lot of what melts can later refreeze onto the ice sheet, but because of the conditions ahead of this summer’s heat wave, the amount of ice lost for good this year might be the same as in 2012 or more, according to scientists. They noted a long build up to this summer’s ice melt – including higher overall temperatures for months – and a very dry winter with little snow in many places, which would normally offer some protection to glacier ice.

‘This is certainly a weather event superimposed on this overall trend of warmer conditions that have increasingly melted Greenland ice over the long term,’ Serreze said.

Compounding the melt, the Greenland ice sheet started out behind this year because of the low ice and snow accumulation, said Snow and Ice Data Center scientist Twila Moon.

With man-made climate change, ‘there’s a potential for these kind of rates to become more common 50 years from now,’ Moon said.

Heat waves have always occurred, but Mike Sparrow, a spokesman for the U.N. World Meteorological Organization, noted that as global temperatures have risen, extreme heat waves are now occurring at least 10 times more frequently than a century ago. This year, the world saw its hottest month of June ever .

‘These kind of heat waves are weather events and can occur naturally but studies have shown that both the frequency and intensity of these heat waves have increased due to global warming,’ Sparrow said in a telephone interview from Geneva.

He noted that sea ice spread in the Arctic and Antarctic are both currently at record lows.

‘When people talk about the average global temperature increasing by a little more than 1 degree (Celsius), that’s not a huge amount to notice if you’re sitting in Hamburg or London, but that’s a global average and it’s much greater in the polar regions,’ he said.

Even though temperatures will be going down in Greenland by the end of this week, the ice melt is not likely to stop anytime soon, Mottram said.

‘Over the last couple of days, you could see the warm wave passing over Greenland,’ she said. ‘That peak of warm air has passed over the summit of the ice sheet, but the clear skies are almost as important, or maybe even more important, for the total melt of the ice sheet.’

She added that clear skies are likely to continue in Greenland ‘so we can still get a lot of ice melt even if the temperature is not spectacularly high.’

Global sea levels could rise as much as 1.2 metres (4 feet) by 2300 even if we meet the 2015 Paris climate goals, scientists have warned.

The long-term change will be driven by a thaw of ice from Greenland to Antarctica that is set to re-draw global coastlines.

Sea level rise threatens cities from Shanghai to London, to low-lying swathes of Florida or Bangladesh, and to entire nations such as the Maldives.

It is vital that we curb emissions as soon as possible to avoid an even greater rise, a German-led team of researchers said in a new report.

Targets set by the accords include cutting greenhouse gas emissions to net zero in the second half of this century.

In addition, water naturally expands as it warms above four degrees Celsius (39.2°F).

The report also found that every five years of delay beyond 2020 in peaking global emissions would mean an extra 20 centimetres (8 inches) of sea level rise by 2300.

‘Sea level is often communicated as a really slow process that you can’t do much about … but the next 30 years really matter,’ lead author Dr Matthias Mengel, of the Potsdam Institute for Climate Impact Research, in Potsdam, Germany, told Reuters.

None of the nearly 200 governments to sign the Paris Accords are on track to meet its pledges.